Saha has been advised surgery. The surgery will take place at the end of July or the 1st week of August .

Believed to be a minor thumb injury, Indian wicketkeeper-batsman Wriddhiman Saha was actually nursing a career-threatening shoulder problem which now requires an extensive surgery, meaning India s first-choice Test wicketkeeper amy even miss out on the Australian tour later in the year.

While some reports claimed Saha s injury got aggravated by a bungled rehabilitation programme at the National Cricket Academy (NCA), the BCCI has come out with clarification Saha had reported to the NCA with a complaint of a left proximal hamstring (sustained during India s tour of South Africa), he also had complained of right shoulder pain.

On Saturday, the board posted a detailed timeline of Saha s injury and further course of action on their official website:

– Saha reported to the NCA (National Cricket Academy) post the South African tour on 29th January 2018 with a complaint of a left proximal hamstring tendinopathy (pain in the upper left hamstring).

– Subsequently an MRI scan was done in February which revealed a Labral tear.

– Appropriate doctor consultations were done with Dr. Srikanth Narayanaswamy, Sports Physician who then advised an ultrasound guided injection, which was duly done.

– Following the injection, Mr. Saha went through a rehabilitation process at the NCA, as advised by the doctors, and on the 19th of March he was discharged by the NCA, having fully recovered from his hamstring and shoulder injuries.

– Saha then went to play IPL with the Sunrisers Hyderabad. On 7th of May he fell twice on his shoulder jarring the joint.

– He thereafter was rested for 5 IPL games while undergoing rehabilitation under the care of the franchise. As a result of this injection and the subsequent rehabilitation, his right shoulder condition improved and allowed him to play without pain towards the end of the IPL. During this period, on 15th of May, Saha requested to visit the NCA head physiotherapist, Ashish Kaushik, so that he could also review his right shoulder. Ashish assessed his right shoulder and concluded that its presentation was similar to how it had been in late January/early February. Ashish informed the Sunrisers Physiotherapist of this who then continued with his course of rehabilitation. The Team India Physiotherapist was informed of this sequence of events.

– On 25th of May he played the next IPL game. Unfortunately Mr. Saha injured his right thumb during this game with x-rays confirming that he had sustained a fracture.

– On 28th of May, he was accompanied by the Team India Physiotherapist to an appointment to visit Dr Sudhir Warrier regarding a surgical opinion for his right thumb. Dr Warrier s opinion was that the thumb injury did not require surgery. At this time, he complained of no shoulder pain or stiffness.

– A further x ray on 2nd of July revealed that the thumb had healed.

– On 3rd of July he reported to the NCA for rehabilitation. At that time he again reported that he was experiencing pain and restriction of movement in his right shoulder.

– On the 4th of July he underwent an MRI of his right shoulder which revealed that his labral tear had worsened as compared to his previous scan.

– On the 6th of July, he was taken to meet Dr. Dinshaw Pardiwala, orthopaedic surgeon, at Kokilaben Ambani Hospital, Mumbai. Dr. Pardiwala opined that another steroid injection would assist Mr Saha’s recovery. He also stated that should the injury not respond to the injection, then surgery would be necessary.

– Post the injection, after observation and rehabilitation for five days, when his condition had not improved, he was declared unfit on the 13th of July and the India team management was informed of the same.

1. Saha has been advised surgery. The surgery will take place at the end of July or the 1st week of August .

2. The labral repair surgery will be done by Dr. Lennard Funk in Manchester, UK.

The entire course of treatment and consultation that was carried out at the NCA was performed in co-ordination with the India Team management and the GM of Operations. 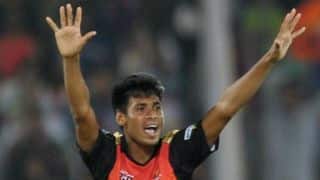