India lost the match and the Freedom Series against South Africa. Faf du Plessis recalled the memories of 2015-16 series when South Africa lost a 0-3 in India saying that the team struggled mentally. He believes the conditions at Centurion were more suitable for Indians.

“It was tough for us in India (in 2015). Personally and as a team we struggled there, and mentally it took a toll on us, even after that series. So the guys were extremely motivated for this series to put that right,” said du Plessis in the post-match press conference.

“I think you could see that in this Test especially. In conditions that should suit them more than us, we adapted really well and we fought every hour to get ahead in the game. It is very pleasing sitting here 2-0 up,” said du Plessis.

Lungi Ngidi was the star performer for the host picking 6 for 39 on his debut. He became the second South African to take five-for against India on debut. He took the vital wicket of Virat Kohli, who scored 153 in the first innings. Du Plessis admitted that Ngidi’s control impressed him the most.

“It speaks volumes for his maturity. When new guys come into the team, from my side it is important to make sure they feel like they belong, but then for them to perform means they have good heads on their shoulders and don’t see the occasion as too big.”

“They just see it as another game where they can perform. When I looked at Lungi I never sensed any nerves. He was really calm and just wanted to bowl. His control impressed me a lot, which is a good sign for his Test career going forward,” he added.

Du Plessis later compared Kohli and AB de Villiers saying they put the bowlers under pressure. He also talked about whitewashing India and is looking forward for the next Test.

“Obviously AB is a special player and we are very privileged to have him in our team because he has the ability to counterattack. Virat Kohli is similar. They put bowlers under pressure, he said.

“Big time! It was the same when we were playing Australia and we were 4-0 up. It s an amazing opportunity – not a lot of South African teams have had it. It makes us even hungrier to go out there as a team, so we re really looking forward to the next Test. We haven t had the opportunity to beat India 3-0 for a while,” du Plessis concluded.

The final match of the Test series is scheduled to be played at New Wanderers Stadium, Johannesburg starting from January 24 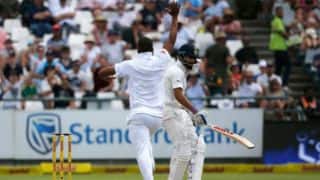 India did not have enough time to get acclimatised to South African conditions, believes Ajit Wadekar