South Africa were surprised by how much they enjoyed playing under the lights, captain Faf du Plessis said on Sunday.

South Africa, whose reluctance to embrace the concept of day-night test cricket threatened to stall Australia‘s charge into the future, were surprised by how much they enjoyed playing under the lights, captain Faf du Plessis said on Sunday. Australia beat New Zealand in inaugural day-night test at Adelaide Oval in 2015 and it required considerable persuasion to get the Proteas to agree to take part in one of two their hosts had planned for the domestic summer in 2016. South Africa had already secured the three-match series by winning the first two tests in Perth and Hobart but went down by seven wickets in their first pink-ball Test on Sunday. FULL CRICKET SCORECARD: Australia vs South Africa, 3rd Test at Adelaide

Cricket Australia, who have also scheduled a day-night test against Pakistan next month, will have been delighted with the bumper crowds as well as the images of stunning sunsets at the picturesque ground that have flashed around the world. Du Plessis was clearly also warming to the concept. “It’s positive,” he said when asked about his first experience. “A lot more positive than I thought it would be before we played it, and I think there’s a real future for it.”

Vernon Philander, named Man of the Series for his 12 wickets and 136 runs over the three tests, was a little more reserved from the bowler’s perspective. “I think we have to get used to the pink ball,” he said. “We need to experiment with it a bit more. Obviously had two warm-up games but I don’t think that was sufficient time to get to get used to it, as a bowler. But there’s definitely a future for the pink ball test.” FULL Cricket Updates, AUS vs SA, 3rd Test, Day 4 at Adelaide

Whether Du Plessis would have held the same view had the match been the series decider is uncertain but there was no doubting his pride in the squad that secured a third straight series triumph in Australia. The 32-year-old, whose own preparations for the match were disrupted by a ball-tampering charge, was skippering the team in place of injured regular captain AB de Villiers.

The South Africans also had to deal with the loss of form of top order batsman Hashim Amla and lost their best fast bowler, Dale Steyn, to injury on day two of the first test. Philander, 21-year-old Kagiso Rabada and Kyle Abbott bowled brilliantly to make up for the loss of the pace spearhead and their contribution was not lost on Du Plessis.

“It’s very easy to captain with a bowling unit like that, you give them the ball and they don’t give the batsmen many scoring shots,” he added. “But the great thing about our team is we’re prepared to go all the way and put in the hard yards. We’re not looking for special stuff, we just want to do the basics really well and our bowling attack has done that magnificently throughout the series.” 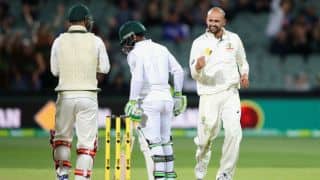