South African skipper Faf du Plessis downplayed the entire incident that happened in the fifth and the final ODI, by praising both Tahir and Warner.

South Africa blanked the world champions Australia recently in a five-match One-Day International (ODI) series at home. The series, which though was a one-way traffic, had a close game at Kingsmead, Durban. The third game of the series finally saw a fight from the Australians who, riding on David Warner s 117 and Steven Smith s 108, posted a massive 371 on the board. They were in the game till David Miller s blitzkrieg snatched it away from them. South Africa thus not only lost the game, but the series as well. They eventually lost the series 5-0, but the final game at Cape Town once again was a close affair.

Powered by Rilee Rossouw s 122 and JP Duminy s 73, South Africa posted 327 batting first. In reply, Australia were in to the case till Warner (173) was at the wicket. He played a lone hand in his 136-ball knock which saw him hit 24 boundaries. The importance of his knock can be understood by the fact that the second highest individual score in the innings was 35, scored by No. 5 and No. 6 batsmen. Thus, it was imperative for the South African bowlers to get under Warner s skin and try and get him out.

Imran Tahir assumed this responsibility and in the 37th over of Australia s innings, when they needed nine runs an over to win, Tahir decided to have a go at Warner. He went up to the 29-year-old batsman, who had just survived a DRS call for LBW, and began an unprovoked argument with him. Tahir had uprooted Aaron Finch and Smith s stumps earlier in the match and was naturally pumped up. What triggered the exchange is still unclear, but it went on for a few overs and required the intervention of umpire Joel Wilson on numerous occasions.

Warner was ultimately dismissed on 173 and Australia on 296, thus losing the match by 31 runs and the series 5-0. But earlier, in a kind gesture, Warner went up to Tahir after he completed his spell and congratulated him by putting his hand over his shoulder. Tahir s face remained stern though. Warner later told the media: “What happens on the field, happens on the field. I honestly have no idea what sparked it … I’m still trying to work it out. For the first time in my life, I didn’t say anything.”

South African skipper Faf du Plessis also downplayed the entire incident, by praising both Tahir and Warner. Immy wears his heart on his sleeve, he said. He loves doing well. I haven t seen him like that, but it just shows how badly he wanted to win the game tonight. He realised that David Warner was playing a great knock and he had to maybe try and get under his skin and the two of them had a few words. That s cricket; that s competitive nature. Dave is trying to win a game for his country and so is Imran, so I don t see anything wrong with that, du Plessis added.

Later, the situation could have spiraled when Tahir ran out Warner on 173. But both the cricketers dealt with the situation in a matured way. The great thing was that when Immy was done Dave put a hand over the shoulder and said let s have a beer afterwards . That, for me, is the spirit of the game. Immy is obviously going to have a glass of water, but it s the thought that counts, du Plessis said. Tahir has been a revelation for the Proteas in last five years, especially in the limited-overs, and has played a huge role in South Africa s successes. Warner too has been a vital cog for the Aussies. The two teams will now face-off in a Test series Down Under. 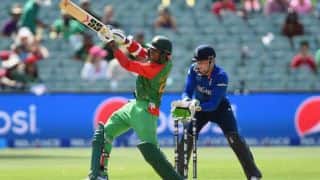 Bangladesh vs England: Hosts' marks out of 10