Faf du Plessis pulled off a remarkable heist as Chennai Super Kings (CSK) turned the tables around to beat Sunrisers Hyderabad (SRH) in Qualifier 1 of Vivo IPL 2018 and make it to the tournament final. Du Plessis added 23 in 9 balls for the ninth wicket with Shardul Thakur (who remained unbeaten on a 5-ball 15) to see CSK through. This will be the seventh time CSK will play an IPL final in their ninth tournament appearance.

(Trivia: Shardul Thakur had once smacked six sixes in an over in school cricket)

Chennai needed 43 in 18 balls when Kane Williamson risked Carlos Brathwaite with the over. It was a decision that SRH will regret in hindsight. CSK had 3 wickets in hand, but more importantly, Faf was at the crease. Harbhajan Singh got a single off the first ball. Faf plundered a four, a six, and a four before Harbhajan was run out at the non-striker’s end while coming back for a second run. Faf got four more off the last ball, which meant CSK needed 23 off their final two overs.

Just when CSK needed a slice of luck, they found it. Siddarth Kaul bowled two good balls. Both of them found Shardul Thakur’s edge and went for fours one to the wicketkeeper’s right, the other to his left. Thakur finished the over with a straight (middled) four off the final ball. CSK needed 6 off the final over, and Faf slammed a six off the first ball of Bhuvneshwar Kumar.

Earlier, SRH s bowling had lived up to their reputation yet again. Yet another IPL match went down the wire, ending in a thriller. Rashid Khan finished with figures of 4-0-11-2.

Chennai evoked memories of their clash against Mumbai Indians (MI) in 2013 at the same venue. Chasing 140, they were bowled out for 79 on that occasion. However, they know about winning at important junctures.

Defending only 140, Bhuvi got the ball to swing early and bowled an impeccable first over. Troubling Shane Watson with swing, he eventually found the outside edge off the fifth ball. Suresh Raina continued from the last game, hitting three consecutive fours off Sandeep Sharma. When he reached 18, Raina surpassed Virat Kohli as the highest run-getter in IPL history. He looked set for a big innings when Kaul bowled him, leg-stump after Williamson had placed a leg-slip and Kaul had resorted to a leg-stump line.

Ambati Rayudu had scored 100* and 79 against SRH earlier in the tournament. He received a dipper from Kaul first ball that swung late, and was bowled. MS Dhoni averted the hat-trick.

Williamson employed Bhuvi for his third over on trot and Dhoni struggled to get going. It was only the third time in his long IPL career that Dhoni had come out to bat inside the first 4 overs. He looked scratchy and was foxed by a googly by Rashid in the eighth over. Dhoni had batted 18 balls for his 9.

Faf, the other opener, remained off strike mostly, facing 6 balls in the Powerplay overs. He got a life when he a hook sailed just over Carlos Brathwaite at deep fine-leg.

Dwayne Bravo and Ravindra Jadeja departed in consecutive overs (12th and 13th) to Rashid and Sandeep respectively to leave CSK tottering at 62 for 6.

Faf teamed up with Deepak Chahar to revive CSK s hopes. They added 30 in 15 balls, taking 14 and 12 off Shakib Al Hasan and Sandeep s over. Then Sandeep struck with the final ball of the 15th over courtesy a brilliant forward diving catch by Brathwaite at long on.

With a 7 pm start, the toss was going to be important. Either side would have opted to chase at Wankhede. Dhoni called it right at the toss and invited SRH to bat. SRH were straightaway on the back foot when Shikhar Dhawan chopped the first ball of the match from Chahar on to the stumps.

Hyderabad have now lost 4 matches on a row. They will play the winner of the Eliminator between Kolkata Knight Riders (KKR) and Rajasthan Royals (RR) at Eden Gardens, Kolkata on Friday in Qualifier 2. 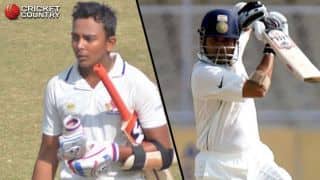