Day Three of the first Test between South Africa and Sri Lanka completely belonged to hosts as their batsmen piled on runs by the loot. The Port Elizabeth track offered nothing but only pain to the Sri Lankan bowlers as opposed to the South Africans. Stephen Cook showcased marvelous form all through the day to finally fall on 117. Sri Lankan bowlers by the end of the day looked exhausted after bowling for 80 overs. Faf du Plessis along with Quinton de Kock added quick runs late into the day to hand South Africa a 432-run lead at stumps on Day Three against Sri Lanka.

JP Duminy and Stephen Cook came out looking for quick runs with almost 25-odd overs remaining in the day s play. Duminy started from where he had left in the first innings hitting boundaries at will. Cook, on the other hand, in a bid to get a boundary above the slip cordon, gave his wicket away. Playing away from his body, Cook ended up nicking the ball to the keeper for a well-made 117 runs that included 11 fours. This was also Dushmantha Chameera s first wicket of the match. Skipper Du Plessis in the middle soon joined Duminy.

Duminy, unfazed by wickets falling around him, continued to pick runs at force. He used his feet well against Rangana Herath and Dhananjaya de Silva. The latter though had the final laugh against Duminy, nabbing him for 25. De Silva drew Duminy forward to a ball that did not turn much and produced a thick edge straight into the hands of Angelo Mathews.

Temba Bavuma came out in the middle to partner du Plessis. His stay however did not last much as the feisty cricketer departed for 8. Bavuma, trying to fend the ball, managed to lob it to the short-leg fielder. To everyone s surprise, the ball was nowhere near his bat or glove. This was de Silva s second wicket.

De Kock came out at No.6 for South Africa and along with du Plessis, managed to block out Sri Lanka from making any further inroads into their line-up.

The pair brought-up their 50-run stand in 62 balls that included some innovative gameplay. 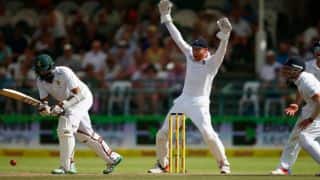