Former New Zealand captain Stephen Fleming had blasted the Hagley Oval head groundsman Rupert Bool on social media last summer for preparing a wicket which did not assist the hosts.

After the 3-0 drubbing in Tests against India and loss in the subsequent One-Day International (ODI) series, New Zealand team has returned back to their country and is currently preparing for the upcoming Test series against Pakistan. Ahead of the first Test of the series, which will be played in Christchurch, the focus has gone back to the Christchurch wicket, which was in the news last year for all the wrong reasons. Former New Zealand captain Stephen Fleming had blasted the Hagley Oval head groundsman Rupert Bool on social media last summer for preparing a wicket which did not assist the hosts.

And now, back in the news, the 34-year-old chief curator of Hagley’s is remaining true to his philosophy that a pitch should be fair. He has clarified that the pitch for the first Test won t be a green top or a dustbowl, but will be a fair wicket, same for both the teams. That has come as a relief to both the teams managements ahead of the first Test starting in Christchurch next Thursday. Fleming had criticised Bool on Twitter before February’s Test against Australia writing, “we’re not here to serve up a pitch to suit New Zealand”. The legendary captain was miffed with the groundsmen on not providing pitches suited to the hosts advantage even as New Zealand get regularly offered dust bowls in the sub-continent.

Bool, in his defence, has said all First-Class groundsmen in the country liaised with New Zealand Cricket’s general manager of grounds and facilities, Ian McKendry, and though were given guidance, but not instructed what pitches to prepare. “It’s generally the same message of a good fair, cricket wicket. There’s no real directive. It’s up to the teams and the weather to help us out a bit,” Bool has been quoted as saying in a Stuff report, predicting a typical Hagley pitch, which would offer benefits for both batsmen and bowlers.

In last week’s Plunket Shield match between Canterbury and Central Districts at the venue, 24 wickets fell to spin, but Bool does not anticipate anything similar on a fresh strip prepared in the middle of the wicket block. “It will be more traditional New Zealand conditions. [The last match at Hagley] was a bit of an anomaly for first class cricket. I don’t think that will be likely to happen Test match time,” he said, adding he tipped the wicket to closely resemble the one used for the 2014 Boxing Day test between New Zealand and Sri Lanka, the first international match at the boutique ground.

“With the Australian Test [in February], we had three 30 degree, very hot windy days, which sucked a lot of life out of the pitch very quickly. I don’t expect that to happen in November. It’s a really nice time of year to prepare a test wicket,” Bool said. Plenty of rain is forecast in the city over the next week, which will keep Bool and his ground staff on their toes. Hagley has received rave reviews from both players and match officials during its short existence as an international ground. It has been rewarded with 25 days of international cricket over the next two summers, including a much anticipated Test against England in 2018. 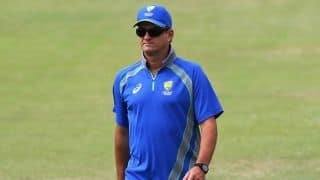