He may have quit international cricket for three years now but the love and affection Sourav Ganguly received on his 39th birthday was enviable. 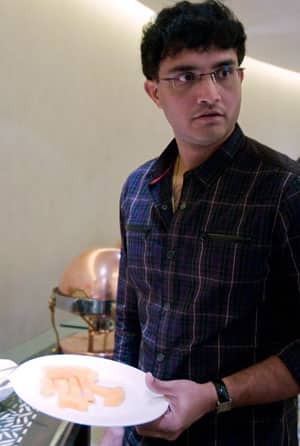 He may have quit international cricket for three years now but the love and affection Sourav Ganguly received on his 39th birthday was enviable.

As a large number of his fans gathered outside his Behala residence this morning, the former Team India captain took time off from his hectic shooting schedule for a TV show to cut the customary birthday cake for the photojournalists before rushing to a studio at Rajarhat.

Later in the day, the Ganguly fans distributed cakes and sweets to schoolchildren and donated a football kit to an underprivileged 10-year-old kid from Sarsuna.

There were more such scenes on the streets of Kolkata.

At Gariahat, ‘Dada Force’ a Facebook fan club with 880 members, have plans to celebrate Ganguly’s birthday by paying a visit to Rajarhat studio in the evening.

“We have fixed an appointment with him through a private agency. We will give him flowers and gifts besides cutting the cake,” Sourav Bhattacharya of the club said.

He further said Ganguly will release a book, titled ‘Dadagiri Unplugged’ written by the group members.

Vendors were also seen selling potraits of Ganguly and former Bengal chief minister Late Jyoti Basu, both of whom share their birthday.

Ganguly these days is busy shooting for a popular Bengali quiz show where he recently hosted Bollywood actor Aamir Khan and his producer-director wife Kiran Rao. He is soon to shoot a special episode with current India opener Gautam Gambhir before leaving to do television commentary in England.

Rampaul not fit to bowl on day three