Former Indian cricketer Farokh Engineer who played 46 Tests and scored 2611 runs, believes he scored the fastest century against West Indies in Chennai in the 1966-67. 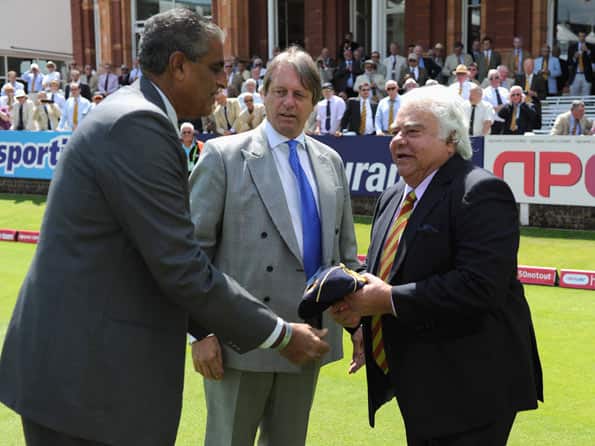 Former Indian cricketer Farokh Engineer who played 46 Tests and scored 2611 runs, believes he scored the fastest century against West Indies in Chennai in the 1966-67.

“I have a strong belief that I scored the fastest century off just 46 balls in a Test match against the West Indies in Chennai in the 1966-67 series. That was against an attack comprising Wesley Hall, Charlie Griffith and the great off-spinner Lance Gibbs,” he was quoted as saying on Sportstar.

He s sympathizes on the fact that cricket didn t get broadcasted the way it is being now.

“Those were the days when live telecast was not the order of the day. Or else, may be, I would have been more popular.

Look at the way all you people go crazy at Aussie opener David Warner’s attacking 180 against India in the Perth Test. I remember vividly I was on 94 at lunch against the West Indies. And, in the first over after the break, I was surprised to see Gibbs being given the ball. It was such a hell of a different feeling after having faced the fast bowlers Hall and Griffith. And, I immediately launched into a huge six to reach the century. I still feel as if the ball is still flying.”

“It is a pity that innings never got its due in terms,” he said.

He goes back in history to tell us how cricketers struggled during those days.

“Well, we played for pride and with a great sense of responsibility. The fact that we were the chosen ones to represent India was the biggest driving force. We were paid Rs. 50 per day for the five-Test matches. Well, even the bat manufacturers in those days used to give us only two or three bats for a two-year contract. It was very difficult then,” he said.

“Exactly for this reason, it hurts to hear about this match-fixing scam and more so when they are paid so well now. How can one ever even think of such dubious things? It is shameful and disgusting. We played the game in its true spirit,” adds the former Indian wicket-keeper.

He was the first Indian to do an endorsement.

“I remember being paid a handsome 2000 Pounds. It was huge money then. My whole house was full of those boxes and my mother used to crib as to where to keep them,” he said.

He shared his view about the dismal performance of India.

“To say the least, Team India was disappointing. The major blame lies with the openers’ failure and the ageing batting line-up. It is time to brush aside reputations and look ahead,” he said nonchalantly.

“No one doubts the contribution of the seniors of the Indian batting line-up over the years. But, the fact that they were struggling and committing the same mistakes really hurt us all.

Does it mean that the seniors should make way for the juniors? “Definitely, but we have to be careful, for experience is always a necessity. So, we missed somewhere down the line the real process of phasing out the seniors even while giving the young talent a chance to settle down,” he argued.

“Quite honestly, Dhoni was never a natural and great wicketkeeper. He is very athletic and more of an attacking batsman who can also keep wickets. Well, keeping standards have gone down across the world of late. And, what surprised me with Dhoni is his negativity of late in Test cricket. Mind you, he is an inspirational leader in the one-day format because he performs well with the bat,” says Farokh Engineer. “It is a pity that he was not playing his natural game. The confident strides to the crease are missing now.”

He thinks it is due to the different conditions overseas which was has been the main reason of India s poor performance.

“Well, in England it is understandable to some extent because of the conditions which favoured swing bowling a lot. But again, it is the batting which has let us down on both the tours, to England and Australia. I don’t think the current Aussie fast bowlers like Peter Siddle or Ben Hilfenaus are as unplayable as say Alan Davidson, Lillee or Thomson were in their prime. The current Aussie bowlers are essentially length bowlers. We failed because, I stress, of the ageing batting line-up and the inability for some strange reasons to avoid committing the same mistakes.”

He believes he and former Indian coach Nari Contractor can do better job than Duncan Fletcher.

“I think me and Nari (Contractor) even now would do a better job. A coach has to essentially work on some odd flaws. The seniors don’t need coaching. Only some free and frank talk to sort our minor flaws that creep into your game for different reasons. You cannot claim to be the world champions unless you start winning matches in Australia, England and South Africa. Get runs on those pitches,” explains Engineer.

He offered to help when the Indian team was in England.

“If the BCCI wants my services, I am always available. In fact, when the team was in England and the morale very low, I did offer my services in my individual capacity by having long chats with many senior players and some youngsters too. That was because I know each and every blade of grass in English cricket,” said Engineer.

For Engineer the most nostalgic moment has been winning the 1971 Oval Test.

“The winning moments of that unforgettable 1971 Oval Test when Chandra (B. S. Chandrasekhar) stunned England, the century against West Indies in Chennai stands out for obvious reasons and the privilege of keeping to the famous spin quartet of Erapalli Prasanna, Bishan Singh Bedi, B. S. Chandrasekhar and S. Venkataraghavan. When we talk of spinners, they should be there (pointing to the sky) and then talk about the rest,” he said.

“Then, that great honour when Sir Donald Bradman took me to his home in Adelaide in 1971 when I was playing for the Sir Garfield Sobers-led World XI,” he adds.

“I remember Sir Don walking up to me and asking me why I was wearing rubber-sole shoes (with which I was more comfortable than the poor quality spike shoes available for me then). Then, he asked me: ‘What are you doing this evening?’ When I said, ‘nothing’, he went off saying that he would come back to pick me. And, to the surprise of my lifetime, he took me to his home and showed a lot of his collections including some pics of his playing days. I don’t think there are many who have had such a privilege. I was left wondering of all the people why me, Sir Don? Anyhow, it was a great honour to spend some time with him and we kept exchanging greeting cards for a long time,” concluded Engineer.