Australia's Fawad Ahmed is unconcerned by the furore his move in not wearing a beer sponsor's logo on his shirt has sparked, according to one-day international vice-captain George Bailey. Australia‘s Fawad Ahmed is unconcerned by the furore his move in not wearing a beer sponsor’s logo on his shirt has sparked, according to one-day international vice-captain George Bailey.

Pakistan-born leg-spinner Ahmed, who became an Australian citizen in July after his application was fast-tracked, did not have the VB beer logo on his shirt during his international debut in last week’s T20 matches against England.

It emerged on Tuesday he had “expressed discomfort with the conflict this created for him” as a Muslim, with the religion’s sacred text, the Koran, banning adherents from drinking alcohol.

Their comments were condemned as “bigoted” by CA chief executive James Sutherland. Bailey said former asylum-seeker Ahmed, who added an ODI cap against Scotland in Edinburgh on Wednesday, had dealt with worrying issues in his life.

“I think he’s probably had to deal with a lot more important things than what’s on the front of his shirt.

“Fawad [has] a great sense of humour,” added Bailey before explaining how Ahmed had forged a strong bond with Australia coach Darren Lehmann.

“He and the coach have a pretty funny relationship. They like to get stuck into each other, which always provides a lot of lighthearted stuff around the group.

“I know now he’s had a taste of playing for Australia he wants to do it a lot — but he wants to do it in all three formats,” said Bailey ahead of the second match of five at Manchester’s Old Trafford on Sunday.

Prior to Bailey’s remarks, Sutherland defended Ahmed by saying: “Fawad is an Australian cricketer, he is as entitled as anyone to represent his country.

“He was made a citizen in July, he has a passport, he has chosen Australia as his home for very good reasons. The Australian cricket community has welcomed him and we’re very proud to have him.”

Sutherland added the criticisms of Ahmed’s shirt stance, which is akin to that of South Africa’s Hashim Amla, who does not wear the logo of Castle Lager, the Proteas’ main sponsor, were “opportunism on some people’s parts to reflect bigoted views.”

This is not the first time Campese has found himself at the centre of a Twitter storm after questioning whether women should be writing about rugby in November when Georgina Robinson was assigned by the Sydney Morning Herald to cover the Wallabies’ tour of Europe.

Kevin Curran: One of Zimbabwe’s finest all-rounders who carved a niche for himself in county cricket 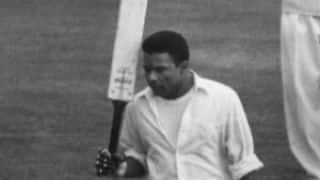