Interestingly, in reply to the question of Lalit Modi's lawyers, Shashank Manohar accepted that N. Srinivasan was never positively disposed towards Lalit Modi and nurtured animosity towards him.

Mumbai: Board of Control for Cricket in India (BCCI) officials on Wednesday were found contradicting as Enforcement Directorate (ED) cross-examinations continue in connection to Foreign Exchange Management Act (FEMA) violations. Former BCCI chief Shashank Manohar was told he has been less than economical in his disclosures, both before the Bombay High Court and the Enforcement Directorate (ED). Manohar took the plea that he was only aware about the deliberations of the working committee meeting of March 22, 2009, wherein it was decided to open account in South Africa for hosting the Indian Premier League (IPL), with the approval of the Reserve Bank of India (RBI).

He asserted before the High Court and ED that he did not know about the further actions in the matter. On the same day, however, Prof Ratnakar Shetty spilled the beans and said that Manohar as President of BCCI was fully aware of the subsequent proceedings like opening of an overseas account which required RBI permission and also the agreement signed between BCCI and Cricket South Africa (CSA).

“Prasanna kanan, the Chief Financial Officer of BCCI-IPL was cross-examined by Lalit Modi‘s lawyers Swadeep Singh Hora and Abhishek Singh. Prasanna Kanan is a IndiaCement employee who according to his own admission was seconded by India Cement to Bcci when Srinivasan held offices in Bcci. When Srinivasan was Secretary bcci, Kanan was posted in Secretariat,” said ICC, in a statement it released on Wednesday.

“When Srinivasan was Treasurer he was in the treasury. Ultimately he was assisting Srinivasan in his role in BCCI. Being an employee of India Cements Prasanna Kanan sought to mislead ED in his statement by trying to shift the blame of financial decisions in IPL on Lalit Modi. Whereas, when confronted with documents which amply proved that all communications from small issues like air ticket bookings to cash payments to franchise was decided by Secretary of bcci ( N.Srinivasan) and Mr Modi was not involved.”

“He could not provide even a single document to substantiate the claim that financial approvals with regard to IPL in South Africa or otherwise were made by Lalit Modi. Rather than being truthful he tried to mislead the ED by not disclosing relevant mails which showed all Financial approvals by Srinivasan,” the statement added. Interestingly, in reply to the question of Lalit Modi’s lawyers, Shashank Manohar accepted that N. Srinivasan was never positively disposed towards Lalit Modi and nurtured animosity towards him.

IPL was only a sub-committee of BCCI. Lalit Modi had no financial powers either to take financial decisions nor had any check-signing authority. Signatories to financial instruments was the Treasurer of BCCI. The cross-examination is now in a very curious stage. Prasanna Kanan and N. Srinivasan were summoned by the ED authorities for cross-examination. But N. Srinivasan, like Chirayu Amin and Sundaram earlier, has skipped the summons and sought adjournment. 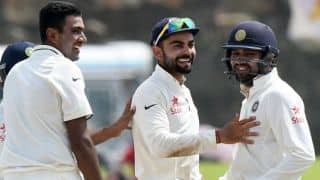