The BCCI has already made it clear that the coach will be appointed before the Sri Lanka tour next month.

Mumbai: BCCI acting secretary Amitabh Choudhary had pleaded ignorance when the rift between Virat Kohli and Anil Kumble was an open secret and today he defended his statement made during the Champions Trophy. Choudhary, who was also in England during the Champions Trophy, had then dismissed reports claiming serious differences between Kohli and Kumble, eventually leading to an acrimonious exit of India’s head coach.”Smoke without fire statement concerning Kohli-Kumble differences was made in real time when I didn’t see any smoke,” said Choudhary here.

Choudhary also reiterated that the final call on the new coach will be taken by the Cricket Advisory Committee (CAC) comprising Sourav Ganguly, Sachin Tendulkar and VVS Laxman. The BCCI has already made it clear that the coach will be appointed before the Sri Lanka tour next month. The Indian team is currently without a coach in the West Indies with batting coach Sanjay Bangar and fielding coach R Sridhar continuing their duty in the Caribbean.

Batting coach Bangar says Anil Kumble s departure as head coach has definitely left a void in the Indian cricket team set-up even though the players are coping up well. Kumble, a spinner par excellence and a former India captain, tendered his resignation as chief coach after the ICC Champions Trophy due to untenable differences with skipper Virat Kohli. On the eve of the second ODI against the West Indies here, questions related to the Kumble episode were directed at Bangar. We are professionals and such things are part and parcel of any organisation where changes happen. The support staff and the players have shown a lot of professionalism in compartmentalising the issues and so far we have coped up really well, said Bangar. 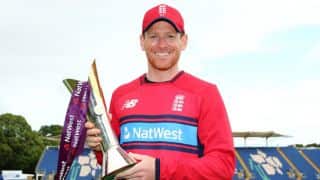