Australia will face Pakistan in a two-match Test series with the first beginning on October 7.

Australia have named the uncapped trio of Aaron Finch, Travis Head, Michael Neser and two-Test spinner Jon Holland in the playing XI for the upcoming four-day tour game against Pakistan A that will begin on Saturday at the International Cricket Academy in Dubai.

According to cricket.com.au, the match will be treated as an official first-class which means the four players, who have been omitted from the squad — Ashton Agar, Marnus Labuschagne, Peter Siddle and Brendan Doggett will not play any further part in the game.

Finch may open the batting along with Matthew Renshaw, a sign that he may make his debut in the two-match Test series beginning on October 7 at the Dubai International Cricket Stadium.

Medium pacer Neser can use the opportunity to assert his place in the squad as pacer spearhead Mitchell Starc s partner for the first Test thereby pipping fellow fast bowlers Siddle and Doggett.

Head will fill in the middle-order berths, but it is learnt that Labuschagne, along with the other players who will miss the tour match, will all be competing for a spot in the playing XI.

Agar, who s still nursing a minor shoulder injury he sustained after staying back for the start of Western Australia’s JLT One-Day Cup campaign, arrived in Dubai and bowled many overs under the searing heat during Australia s training session at the ICC Academy on Thursday.

Holland might partner off-spinner Nathan Lyon for the first Test. 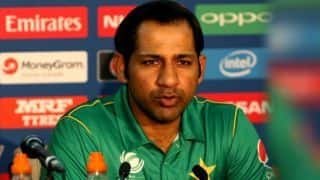