Alastair Cook was given a sustained standing ovation as he made his way to the wicket for the final innings of his illustrious Test career at the Kia Oval on Sunday. Cook, who holds the record for most England Test appearances, runs and centuries, was dismissed for 71 in the first innings of the fifth Test against India.

The Essex opener, 33, has struggled for runs this year but is looking to finish his England career on a high. Cook, who scored a hundred on his Test debut, is playing in his 161st match. He has 32 centuries and more than 12,000 runs.

Most centuries for England

Alastair Cook’s 32 Test centuries are more than any other England player has managed, and is the 10th-most overall. Since his debut, England have scored 163 centuries, meaning Cook alone has accounted for almost one-fifth of his country’s tons. 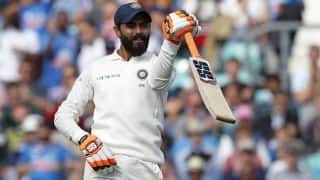