The 51-year old Vasu replaces former India all-rounder Hrishikesh Kanitkar, whose stint as the team coach ended earlier this year after the team bowed out of the Ranji Trophy in the preliminary stage.

Vasu would be the head coach for the season 2019-2020, while former Tamil Nadu batsman R Prasanna would be the assistant coach, the Tamil Nadu Cricket Association said in a press release.

“The Executive Committee of the TNCA in its meeting held on 19th August 2019 had confirmed Mr D Vasu as the Head Coach and Mr R Prasanna as the Assistant Coach for Tamil Nadu State seniors team for season 20192020,” the release said.

He also scored 3,001 runs, inclusive of three 100s and 19 half-centuries. In List A cricket, he scored 527 runs in 41 matches while picking up 50 wickets. He was also involved with the National Cricket Academy as a coach.

The 51-year old Vasu replaces former India all-rounder Hrishikesh Kanitkar, whose stint as the team coach ended earlier this year after the team bowed out of the Ranji Trophy in the preliminary stage. The team had bowed out from Vijay Hazare Trophy from the group stage prior to the Ranji Trophy.

“I am delighted to be the coach. It is a great honour to coach the team which I represented. I will do try to do my best to see that we get to a better position in the Ranji Trophy, Vijay Hazare Trophy and Syed Mushtaq Ali Trophy tournaments,” Vasu told PTI on his appointment as the Tamil Nadu coach.

He said there will be a camp for the selected players in September ahead of the season, which begins with the Vijay Hazare Trophy. 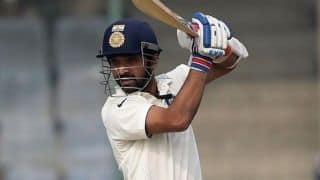