Primarily a middle-order batsman and a medium-pace bowler, he featured in five Tests from 1967 to 1972 and two ODIs in 1972

Former Australian cricketer Graeme Watson who was fighting cancer, has died at the age of 75. Primarily a middle-order batsman and a medium-pace bowler, he featured in five Tests from 1967 to 1972 and two ODIs in 1972, ESPNcricinfo reported.

The allrounder earned the national call during the 1966-67 tour of Rhodesia and South Africa. Watson slammed a half-century in the first innings of the second Test of the series.

However, the medium-pace bowler was ruled of the next test after suffering an ankle injury. He returned for the fourth Test in Johannesburg where scalped his career-best 2 for 67 but failed to leave a mark with the bat as Kangaroos lost the series.

“Beatle lived a very full life and he was looking forward to caring for (wife) Jan in her post-operation period but unfortunately the tables were turned and it was she who lovingly cared for him,” said Chappell.

Chappell remembered an incident when he and Watson were batting against England and his partner took a nasty blow. “I was batting with Watson when an unintentional beamer from Tony Greig hit him in the nose and he was carted off the ground bleeding profusely,” Chappell wrote in his column for Nine.

“He was extremely unfortunate as Greig’s delivery was affected when his bowling hand hit the stumps and Watson top-edged a ball that would’ve hit him in the chest if his attempted pull shot had missed.

“It was only on that 1972 tour when I met one of his nurses at a social function that I found out Beatle had actually stopped breathing for a while when he was in hospital. It was typical of Beatle to say very little about the incident; he made light of any injury and at times was too brave for his own good.”

Chris Gayle Warns Yuzvendra Chahal For His Social Media Activities, Says 'You Are Very Annoying, I Don't Want to See You in My Life Again' 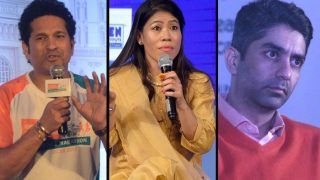 From Sachin Tendulkar to Abhinav Bindra, India Icons Predict How Sporting World Will Change After Coronavirus