Former Cricket Australia (CA) conditioner Jock Campbell has urged Matthew Hayden to come out of retirement and make himself available for selection in the national team for next year's Twenty20 World Cup. Former Cricket Australia (CA) conditioner Jock Campbell has urged Matthew Hayden to come out of retirement and make himself available for selection in the national team for next year’s Twenty20 World Cup.

The 40-year-old is all set to represent Brisbane Heat in the Big Bash League and Campbell felt that Hayden still has a lot to offer to Australian cricket.

“Mate, my only request, make yourself available for the Aussie T20 team for next year’s World Cup. Australia would love to see you take us to another World Cup win that would make it your third,” Campbell, a valued member of the team’s support staff between 2000 and 2005, said.

Campbell, who supervised Hayden’s training during his Indian Premier League career, said that the veteran batsman had committed himself to a gruelling 16-week pre-season training program to get back to shape.

“For the last 16 weeks, Matthew has made it his priority to get his body and cricket skills right for Twenty20 cricket,” Campbell was quoted as saying by Sydney Morning Herald.

“He’s been out of the game for a bit over a year, so he made it a conscious decision to get himself into shape for the Big Bash.

“He did two blocks of six weeks and one of four to prepare and it has involved three gym sessions a week; two running; at least two cricket skills sessions, but sometimes more; two physiotherapy and massage sessions to ensure everything was right. He’s also had weekly acupuncture,” Campbell said.

Hayden, who has been doing fielding sessions with Queensland coach Darren Lehmann, does not count his weekly three-kilometre swim as part of the training.

“His work suggests to me the big fella is completely committed to succeeding. Matt is one of those guys who keeps reasonably fit through surfing and his training. He swims every week and that’s not on his training sheet.

“But he realised reasonable fitness — (as) opposed to what’s needed to sprint around the boundary, go flat out between the wickets and hit the ball 20 rows back — is different. He knows he needs to be in top condition,” said Campbell. (PTI) Windies board trying to get rid of Chris Gayle: Dinanath Ramnarine 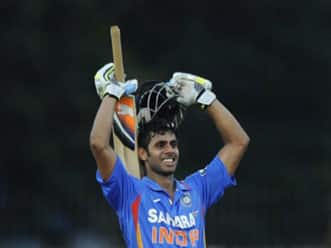