The cricket fraternity on Monday hailed the Indian team's "tremendous achievement" of winning the ICC Champions Trophy 2013 with some former players raising a toast for captain Mahendra Singh Dhoni's "ability to rise from the ashes" and instill confidence in his young teammates. 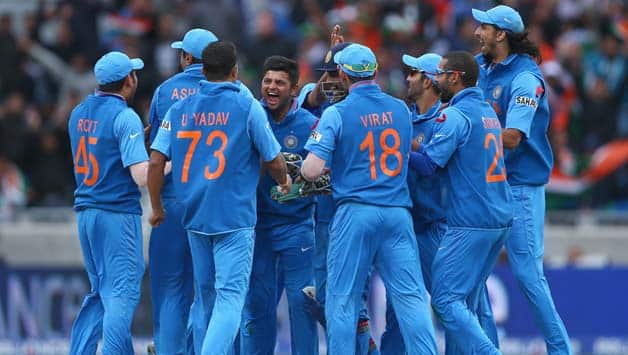 The cricket fraternity on Monday hailed the Indian team’s “tremendous achievement” of winning the ICC Champions Trophy 2013 with some former players raising a toast for captain Mahendra Singh Dhoni‘s “ability to rise from the ashes” and instill confidence in his young teammates.

Former players spoke highly of the young team’s ability to perform under pressure and said it augurs well for the future of Indian cricket, despite the recent retirements of many stalwarts.

“He [Dhoni] has got this ability of rising from the ashes. It is his temperament where he has treated those two imposters — fame and failure — in just the same manner. I think that is the reason why he is able to bounce back after a tough time,” Gavaskar said.

Former India captain Gundappa Viswanath also lauded Dhoni who now holds the unique record of being the only captain to win three world titles in the sport.

“It’s a tremendous win. We expected them to win, especially after the way they started the tournament. Full marks to MS Dhoni. Now, he has all the world titles to his name. He is undoubtedly one of the best captains we have ever produced. There has been no change in his captaincy and he has been continuing in the same way with his cool and composed approach to the game and is taking up the challenge up front,” Vishwanath said.

Another former Indian captain and selector, Krishnamachari Srikkanth said that India has again proved their superiority.

Gavaskar said Dhoni has managed to develop the team into a good unit.

“You expect a final to be a close thing but before that till the semi-finals they have won quite easily. It just speaks volumes about the way this team has developed into a unit. It speaks volumes of their temperament.”

Former India coach Anshuman Gaekwad was of the view that the Champions Trophy triumph would help in restoring the fans faith back in the game which took a beating in the aftermath of the spot-fixing scandal in IPL 6.

“I am extremely happy and proud to be an Indian. They have played all-round cricket. These small targets are always dangerous, but the boys did not wilt under pressure and showed amazing character,” he said.

“It’s so much important to win the trophy to win the faith of Indian cricket fans back. It’s a tremendous achievement from that point of view.”

Former skipper Ajit Wadekar said that the victory has proved that India has lot of talent and the retirements of some of the greats have not affected the team.

“It was a superb win. Hats off to Dhoni, I think he is the best captain we have got. Despite not having Sachin [Tendulkar] Rahul [Dravid], Dhoni could get all the youngsters together and showed the team spirit within this unit. This looks like a complete team and Dhoni is probably the best captain India has ever had,” he said.