A former Essex bowler became the first English cricketer to be jailed for corruption on Friday for his role in a spot-fixing scam that has implicated Pakistan international Danish Kaneria. Mervyn Westfield was given a four-month prison sentence AFP

A former Essex bowler became the first English cricketer to be jailed for corruption on Friday for his role in a spot-fixing scam that has implicated Pakistan international Danish Kaneria.

Mervyn Westfield was given a four-month prison sentence after admitting receiving 6,000 ($9,200) to bowl so that 12 runs would be scored in the first over of a 40-over match between Durham and Essex in September 2009.

Westfield was ordered to serve half the term behind bars, while he was also hit with a confiscation order for 6,000 during a hearing at the Old Bailey.

Judge Anthony Morris said Westfield must serve time in prison as a “deterrent” to others tempted by corruption.

Morris said Westfield “knew from the outset this was a corrupt approach, and you could and should have refused it. You chose not to do so.

“For financial gain, you have betrayed the trust — of Essex, players, fans and the followers throughout the world — in you to play cricket honestly.”

“While the ICC takes no pleasure from anyone being sent to jail, it is a decision of the court which we support and I believe would act as a deterrent to anyone who is tempted to sully the good name of cricket,” Lorgat said.

Essex County Cricket Club described Westfield’s conviction as a “very sad day” as it planned to “fully digest the comments of the judge.”

Prosecutors had earlier told the court that Westfield, 23, became embroiled in the scam after an approach by Kaneria.

Nigel Peters QC said the deal emerged after another Essex player, Tony Palladino, went back to Westfield’s flat in September 2009, where the bowler showed him “the most money he had ever seen”.

Defence barrister Mark Milliken-Smith said Kaneria and his associates had targeted Westfield as he had been deemed “more susceptible” to corruption as a young player on the fringes of the squad.

“He bitterly regrets what he has done, he is utterly ashamed,” Milliken-Smith told the court in mitigation.

Kaneria was arrested in connection with the case in 2010 but later released without charge. Before Friday’s hearing, the identity of the player who had made the initial approach to Westfield had not been disclosed.

“It is Westfield’s words against Kaneria and a lot will depend on what evidence he puts before the court against my client,” Naseem told AFP.

Naseem reiterated that Kaneria had not been charged by the police.

“At the time of the police inquiry, Kaneria was not charged and cleared. The ICC cleared him so we feel that Kaneria was discharged in the case,” he said.

The Pakistan Cricket Board (PCB) withdrew Kaneria after he was selected for the series against South Africa in October 2010 and has since not cleared him for selection, apparently waiting for the Westfield inquiry to be completed.

Kaneria’s petition against the PCB to revive his career was dismissed by the Sindh High Court in November last year and despite vowing to take the case to higher courts, Kaneria has not made any progress.

Pakistan captain Misbah-ul Haq said he was saddened by Kaneria’s implication in the case.

“This is really very disappointing for Pakistan cricket,” said Misbah in Dubai on the eve of the third one-day international against England on Saturday.

“I wish that by the Almighty’s grace such things will vanish from our cricket.” 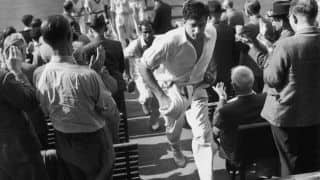