Rajesh Chauhan still holds the world record of playing most Test matches for an undefeated side.

Former India cricketer Rajesh Chauhan on Monday suffered a massive heart attack, following which he was admitted to a hospital in the nation’s capital. He is currently in Intensive Care Unit (ICU).

According to Patrika, the 47-year-old former spinner was admitted in the Apollo Hospital in Bhilai after suffering the attack. Chauhan played 21 Test matches for India in which he took 47 wickets. He played 35 One-Day Internationals (ODIs), wherein he claimed 29 wickets.

He played 99 First-Class matches during his career, and bagged 318 wickets. In his debut Test against England in January 1993 at Kolkata, Chauhan claimed five wickets (three in the first and two in the second).

Chauhan’s best bowling performance in a ODI match was against Pakistan in April 1994, as he claimed three wickets for 29 runs off his nine overs. He still holds the world record of playing most Test matches for an undefeated side. 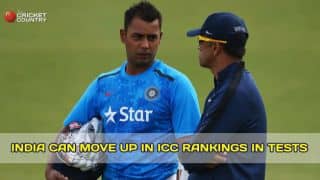