Arothe was among the 19 people arrested by the police on late Monday night.

Tushar Arothe, the former coach of India’s women national cricket team, was arrested late on Monday night after the detention of crime branch busted an IPL batting racket in his cafe in Alkapuri. Arothe was among the 19 people arrested by the police, along with partners Hemang Patel and Nischal Mitha.

Arothe played Ranji Trophy for Baroda between 1985 to 2003 and upon retirement, was appointed coach of the Indian national women’s team in 2017. The crime branch detectives revealed that Patel was involved in heavy betting in Match 13 of the IPL between the Delhi Capitals and Kings XI Punjab in Mohali.

“We had received a tip-off about the betting activities at the Cafe Stock Exchange in Alkapuri where a big screen was placed to relay IPL matches. We kept a watch there and conducted a raid on Monday night. Some persons sitting in a shed next to the cafe were involved in online betting on the IPL match,” said Jaydeepsinh Jadeja, DCP (crime).

“We checked their mobile phones and found that 19 persons, including Hemang, were placing bets on three different mobile applications. Hemang, who is one of the partners in the cafe, had betting app in his mobile and he was accepting and placing bets on the IPL match. Arothe too was present at the spot,” Jadeja told Times of India.

Jadeja added that the cell phones of all 19 people were seized, and upon checking it was discovered that each device had betting apps. Arothe’s son, Rishi, who plays Ranji Trophy for Baroda, was also one of the partners in the cafe but as per Jadeja, he wasn’t present when the raid was conducted.

“Our investigations revealed that Hemang is in the business of betting on cricket games. He used to accept and place bets worth lakhs and he was in touch with a man named Baba. We are now trying to track down Baba,” Jadeja added.

Although the accused have been released on bail, their phones and vehicles were confiscated. “I had reached at the cafe just 20 minutes before the cops came in. I am not at all involved in any kind of betting. The police checked my mobile phone and didn’t find any betting app in it,” Arothe told TOI.

“I don’t know why I was arrested. If some customers come in my cafe and bet on mobile apps, how would I know that? As far as Hemang is concerned, he is a partner in the cafe but he always sat with his friends. I have no idea that he was placing bets. I have not committed any illegal activity and I will fight it out for my honour,” Arothe said. 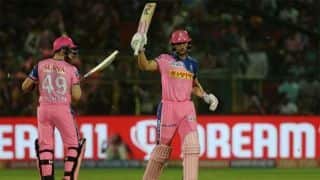