Former players rallied round Pakistan captain Misbah-ul Haq on Wednesday despite his side's woeful showing in the 4-0 one-day series mauling by England. 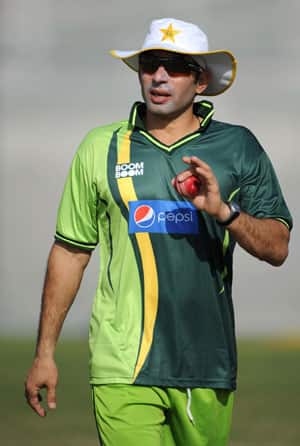 Pakistan, led by Misbah-ul-Haq failed to carry their momentum from the Tests into the ODIs, losing 4-0 to England Getty Images

Former players rallied round Pakistan captain Misbah-ul Haq on Wednesday despite his side’s woeful showing in the 4-0 one-day series mauling by England.

Pakistan failed to carry the momentum of their 3-0 Test whitewash of England in the UAE into the one dayers, losing all four games to suggest they will be vulnerable to their resurgent rivals in the Twenty20 series starting Thursday.

England strolled to a four-wicket win in the fourth game in Dubai on Tuesday, with Kevin Pietersen hitting a second successive hundred.
The sudden slump in form prompted former captain Imran Khan to bemoan a lack of depth in Pakistan’s squad.

“England lifted itself after the Test defeat while Pakistan failed to carry on the good work,” Khan told reporters. “We lacked depth in bowling and batting and that helped England win all the matches.”

But the legendary all-rounder backed captain Misbah-ul Haq to continue as skipper in the short form of the game, having already led a remarkable revival of the Test side.

“Misbah needs to show more aggression but it’s early to write him off,” said Khan, who led Pakistan to their only World Cup win in 1992.

“Misbah must bat up the order to get good totals.”

Khan rejected the suggestion the side would be better served by separate captains for the three forms of the game.

“If one captain is doing well in all three forms of the game then there is no use having separate captains,” said Khan, who now heads political party — Tehrik-e-Insaaf, which means Movement for Justice.

Former spinner Iqbal Qasim also backed Misbah, urging critics to give him time to turn around the side’s one-day fortunes.

“He has committed some mistakes but we should back him,” he said, adding that the team appeared to relax in the one-day series after their Test win.

“There was lack of consistency in the selection, sometimes they played with four spinners and just one seamer which affected their performance,” he said.

“Like other teams we should also designate some players for Tests, some for one-day and some for Twenty20 because this has proved beneficial for other teams,” said Qasim.

“Bring back Shahid Afridi as captain because Misbah lacks aggression, both as captain and batsman,” said student Rehan Mahmood. “We need to have an aggressive captain like Afridi.” (AFP)