Pakistan's cricketers came under fire Monday after their series defeat in South Africa, with former players blaming the team's timid approach for their loss in the second Test. 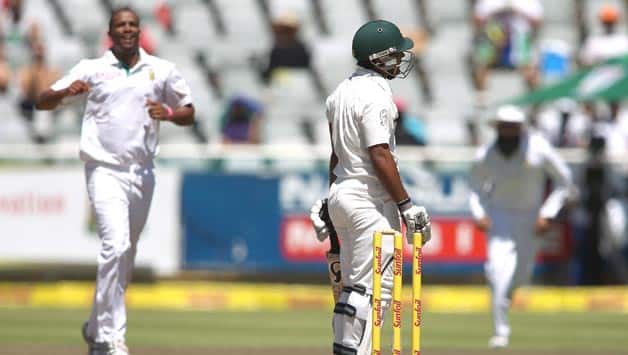 Pakistan‘s cricketers came under fire Monday after their series defeat in South Africa, with former players blaming the team’s timid approach for their loss in the second Test.

South Africa, the number one ranked team in Test cricket, beat the visitors by four wickets in the Cape Town Test on Sunday to take an unassailable 2-0 lead in the three-match series.

“This Pakistan team had the ability to beat South Africa but they seemed to be thinking a lot about their rival’s world No 1 status and that their bowling is very dangerous,” Inzamam told AFP.

Pakistan lost the first Test in Johannesburg by 211 runs after crumbling to 49 all out in the first innings in the face of the hosts’ hostile pace bowling attack.

Inzamam worked with the team as a “batting consultant” before their one-day tour of India in December and there were calls for him to be kept on permanently, though nothing came of them.

“Pakistan must show more aggression in its approach,” said Inzamam, who hit an unbeaten 92 in Pakistan’s last Test win in South Africa in 2007.

“What I saw was that a batsman scores 50 in 150 balls, that gives bowlers more domination. Once a batsman is set he should attack and score freely.”

Inzamam said Pakistan should have gone for the kill when they had South Africa wobbling at 164-6 in their first innings.

Instead, spinner Robin Peterson hit a gutsy 84 to guide the hosts to 326, just 12 short of Pakistan’s first innings total of 338. Pakistan then collapsed from 147-4 to 169 all out in their second innings, setting a modest 182-run target.

Pakistan were missing rising paceman Junaid Khan and another former captain, Rashid Latif, who said the batsmen needed to set a bigger total for the bowlers to defend.

“It was a small target and our pace attack had one debutant (Mohammad Irfan), one bowler staging a comeback after 18 months (Tanveer Ahmed) and one on the downslide of his career (Umar Gul),” said Latif.

Latif backed captain Misbah-ul Haq to carry on but urged the Pakistan board to bring in Inzaman and fast bowling legends Wasim Akram and Waqar Younis as coaches.

Former opener and ex-coach Mohsin Khan blamed the coaching staff, saying there was a lack of planning to target South Africa’s weaknesses.

Indian spinners will be under pressure against Australia, opines Usman Khawaja