The interim chairman of the Pakistan Cricket Board, Najam Sethi, has said that some elements tried to get the membership of the board suspended with the ICC. 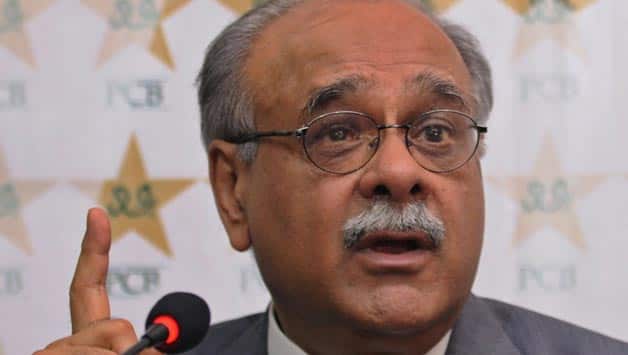 Najam Sethi said that he did not want to get into a blame game, and will instead sit with the concerned people and discuss the matter © AFP

The interim chairman of the Pakistan Cricket Board (PCB), Najam Sethi, has said that some elements tried to get the membership of the board suspended with the ICC.

Sethi who returned home after attending the ICC annual meetings in London told reporters in Lahore that there had been efforts to get Pakistan’s membership suspended.

“It is very unfortunate but also true that some people including former board officials had tried to convince the ICC to suspend our membership,” Sethi said.

“I don’t want to take names but the good thing is that when the officials of the ICC and member boards met us, they supported us,” Sethi added.

Sethi was appointed as interim chief by the government late last month after the Islamabad High Court suspended Zaka Ashraf from working as head of the PCB after a constitutional writ petition was filed against his election as chairman in May under the new constitution of the board that is approved by the ICC.

Sethi and the inter provincial coordination ministry have also been asked by the IHC to explain how he [Sethi] was appointed as interim chairman when the ministry had given three other names and his name didn’t figure in that list.

The IHC is due to hold a hearing tomorrow to hear out the inter provincial coordination ministry and Sethi.

Sethi said that he did not want to get into a blame game, and will instead sit with the concerned people and discuss the matter.

The media has reported that some former board officials had contacted member boards of the ICC, including the chairman of the BCCI, and asked for their support to get the membership of the PCB suspended on grounds that the government had interfered in cricket affairs.

But apparently the ICC and member boards made it clear it didn’t want to get involved as it was an internal matter of the PCB and was in court.

Talking about the ICC awarding no event to Pakistan in the cycle until 2023, Sethi said this decision was taken in the previous meeting of the apex body.

He said the current security situation in Pakistan had almost ruled out any prospect of international cricket returning to home soil any time soon.

“After [the] Sri Lanka attack, no team wants to come to play here, not even Bangladesh. Maximum we can do is ask them [ICC] to review after a year. But they demand assurances and demonstrable progress,” he said.

Sethi also confirmed that after much persuasion the ICC had formed a sub-committee to look into the anti-corruption laws and see how, after the five-year sentence ends, can Mohammad Aamer play Test cricket again.

Sethi claimed that the review was a big win and that now he and his colleagues had decided to hire a British lawyer for Aamer.

“We will hire a white lawyer in UK to look at the anti-corruption laws and look at ways to get at least 20 per cent relief for Aamer.”

On a question about Salman Butt, Sethi said that while Aamer had repented and sought rehabilitation, Butt on the other hand had gone to every court, and it was only after he had been turned away that he admitted his guilt.

Salman Butt should be brought to book after admitting to spot-fixing: Petitioner