A Mumbai-based bookie has alleged that four players from Sunrisers Hyderabad have fixed an Indian Premier League (IPL) match for Rs six crores. The bookie recorded his statement in front of Mumbai Police Crime Branch in its chargesheet filed on Saturday. 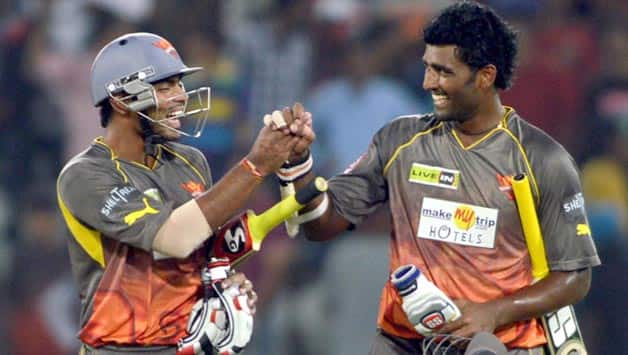 According to the report, the bookie confessed to the Mumbai crime branch that Ashish Reddy (left), Thisara Perera (right), Karan Sharma and Hanuma Vihari were involved in match-fixing © IANS

A Mumbai-based bookie has alleged that four players from Sunrisers Hyderabad have fixed an Indian Premier League (IPL) match for Rs six crores. The bookie recorded his statement in front of Mumbai Police Crime Branch in its chargesheet filed on Saturday.

The four players who have been named are Thisara Perera, Hanuma Vihari, Karan Sharma and Ashish Reddy, according to news report published in Deccan Chronicle.

The bookie was arrested from a Mumbai hotel by Delhi police special cell. According to the report, the bookie met the four players in Pune and had finalised the deal with the help of other bookies.

It is being said that one of the player’s brother was the mediator in the deal. Cricketers Ashish Reddy and Hanuma Vihari were unreachable for comments.

Further investigations stated that Chandresh Shivlal Patel was one of the bookies. The police recorded his statement on June 17. In his statement, Patel said that Pravin Thakkar, alias Pintu, introduced him to one Jitu Jain. Pintu furthered introduced Patel to Mannan, who was identified as friend of cricketer Amit Singh. Patel’s was also introduced to Yusuf and Amir by one of his friends in Mumbai.

“In the last week of March, Yusuf gave me Amir’s number and asked me to call Amir, who wanted to talk about IPL matches. When I called Amir, he told me to come to Hyderabad `to set’ an IPL match there. I informed Jitu about this and he asked me to take along Pintu to Hyderabad for the deal. I then went to Hyderabad with Pintu and Yusuf. Amir accommodated us in a hotel room,” Patel was quoted as saying Deccan Chronicle.

“Amir told us that it would take Rs 5 crore to fix an IPL match in Hyderabad and Rs 1 crore will be mine (commission), so the total cost would come to Rs 6 crore. “Pintu informed Jitu about the offer, who in turn told us to finalise the deal if they could arrange a meeting with the players. Amir told us that he would arrange a meeting with the players on April 16 in Pune, but asked for an advance of Rs 50 lakh.”

“Pritam asked me what I wanted to do, to which I said that the score should not cross 60 runs in 10 overs and 140 runs in 20 overs and Sunrisers should lose the match,” Patel claims.

“The next day, Amir called me and said that Pritam told him that the signal was that in the second over a Sunrisers Hyderabad player will get out,” claimed Patel.

Sunrisers Hyderabad played Pune Warriors India on April 17 and as mentioned by Amir, in the second over a Hyderabad player was dismissed. Jitu was said to have placed bets of 3.5 crore for the first 10 overs and 9 crore for overall result. Jitu won the bet, however, lost the nine crore as Hyderabad won the match, which was not the deal.