Sathish lost his place in the side earlier this season.

Ganesh Sathish spoke to Nishad Pai Vaidya after his ton in the Ranji Trophy 2013-14 final.

Ganesh Satish stole the show on Day Two of the Ranji Trophy 2013-14 final with a dazzling knock that has put Karnataka in a commanding position against Maharashtra. Sathish lost his place in the side earlier this season and missed the knockouts in the lead-up to the final. But, the team management drafted him in for the big game and he responded with a crucial ton at No 3.

In an exclusive chat with CricketCountry, Sathish talks about his ton and its importance for him.

CricketCountry (CC): Having come into this all important game, you have answered the calls by scoring a ton. You have missed out on a few games, but this has to be the best moment of your career so far in your career?

Ganesh Sathish (GS): Yes, but the job isn’t complete. Third day’s play is also very crucial. I think, once we get the lead and then go on to win the game, then it would be the best moment.

CC: What was the added pressure of the final like when you walked in to bat?

GS: It wasn’t just because it was a final, because there was a new ball and it was moving a bit. Initially, there was pressure, but Lokesh Rahul and I spoke to each other. We batted together before and enjoyed it.

CC: Early in the innings, you were a bit cautious. Was it a ploy to see off the new ball then?

GS: Yes, it was a conscious effort to play a bit cautiously and then look for the singles. Later on, when the ball got a little older, we could dominate the bowlers.

CC: In the afternoon session you were particularly attacking against the spinners and were using your feet. Was there any turn in the wicket?

GS: The off-spinner was getting a bit of turn from outside the off-stump. There was a bit of turn for Chirag (Khurana). But apart from that, the turn wasn’t much off the wicket. It is a bit slow, but I don’t think there would be vicious turn.

CC: That catch was dropped at mid-wicket. You must have had your heart in your mouth?

GS: (Smiles) Yes, definitely. I was counting my lucky stars.

CC: Can you talk us through the moment you got the ton? Maharashtra had packed the off-side.

GS: Once it was short and wide, the wicket is such that you can use the pace of the ball. So, I wasn’t looking to hit it too hard, but only place it (through the gap).

CC: The celebrations said everything. You have been out of the side for some time. What do you think this ton would do for you?

GS: The ton was very crucial for me. Initially, I felt I played a bit out of position as I was batting at No 7 position and I got only one innings at No 3, where I have played for the last five seasons. I was disheartened when I was out of the side, but I am happy that I got this opportunity in the final.

CC: What would be your targets for Day Three? 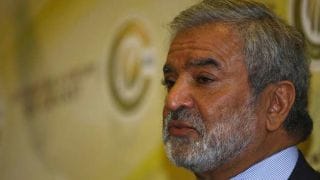