Bangladesh have not had a coach since Sri Lankan Chandika Hathurusingha stepped down in October after a successful three-year stint.

South African great Gary Kirsten, who coached India to World Cup success, said Tuesday he is helping rudderless Bangladesh quickly to find a coach ahead of a looming tour.

Bangladesh have not had a coach since Sri Lankan Chandika Hathurusingha stepped down in October after a successful three-year stint.

The Bangladesh Cricket Board (BCB) has appointed Kirsten as a consultant to help find a coach before a tour of the West Indies in July and August.

I know Chandika did a great job with the team. I just want to understand what that was about and what made the team do well in that time, said the 50-year-old.

Hopefully in a couple of weeks I will have someone in place to take the team forward.

Under Hathurusingha, Bangladesh reached the World Cup quarter-finals in 2015 and the Champions Trophy semi-finals in England last year.

Kirsten, who represented South Africa in 101 Tests and 185 one-day internationals before coaching the Proteas and India, said he could remain linked to Bangladesh through to the World Cup in England next year.

Kirsten, who guided India to World Cup success in 2011, said: I have no doubt that the team can compete at the highest level.

And I think there is every intention to set some lofty goals in terms of what they want to do over the next 18 months or so. 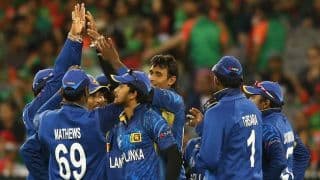