Ireland batsman Gary Wilson played a sensible and crucial knock of 38, as he allowed Ieland to post a challenging total of 154 for the loss of five wickets in 20 Overs against Oman, in Group A Round 1, Match 4 of the ICC World T20 2016, at the Himachal Pradesh Cricket Association (HPCA) Stadium in Dharamsala on Wednesday. Munis Ansari was the highest wicket-taker with three for 37. Oman would be needing to chase down a total of 155 in 20 Overs to get their opening win of the tournament. Earlier, Ireland skipper William Porterfield won the toss and elected to bat first, as both the teams went in with a balanced side. LIVE CRICKET SCORECARD: Ireland vs Oman, ICC World T20 2016, Group A Round 1, Match 4 at Dharamsala

The Irish started off their innings on a good  note, with the openers in the form of Porterfeild and Paul Stirling, contrinuting to bring up a healthyb 48-run opening stand, before Stirling fell for 29 to Aamir Kaleem, after being brilliantly caught by Zeeshan Maqsood at the covers. It was followed by a 36-run stand for the second wicket, before Porterfield fell for 29 to Khawar Ali, after he was stmped by Sultan Ahmed. LIVE CRICKET UPDATES: Ireland vs Oman, ICC World T20 2016, Group A Round 1, Match 4 at Dharamsala

As the score read 112, it was Niall O’Brien, who fell for mere 16 to Ansari, after being caught by Mehran Khan, and the over same over of 16th saw the fall of Gary Wilson, who was bowled bafter scoring a healthy 38. However, it was not until the final over, before Kevin O’Brien was dismissed for Ansari again, who bowled him up, as it was the final pair of Andrew Poynter and Andy McBrine that batted out the remaining balls, as Ireland finished on a challenging total of 154 for the loss of five, as Ansari claimes three for 34. 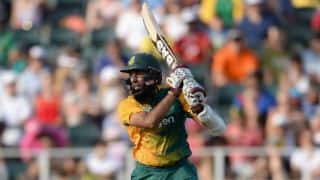