Slamming Kashmiri separatist leader Mirwaiz Umar Farooq for congratulatory tweet on Pakistan's maiden ICC Champions Trophy triumph over India, seasoned cricketer Gautam Gambhir has suggested that he celebrate the win in Pakistan rather than in Kashmir.

New Delhi: Slamming Kashmiri separatist leader Mirwaiz Umar Farooq for congratulatory tweet on Pakistan‘s maiden ICC Champions Trophy triumph over India, seasoned cricketer Gautam Gambhir has suggested that he celebrate the win in Pakistan rather than in Kashmir. Gambhir’s strong reaction came after the Hurriyat leader on his Twitter handle expressed his joy at Pakistan beating India by 180 runs in the Champion’s Trophy final at The Oval in London on Sunday. “Fireworks all around, feels like an early Eid here. Better team took the day. Congratulations team #Pakistan,” Farooq tweeted. To this, the famed left-handed Indian opening batsman not only slammed Farooq, but also indirectly took a dig at China’s increasing ‘colonisation’ of Pakistan. Full cricket scorecard: India vs Pakistan, Final at The Oval

“A suggestion @MirwaizKashmir why don’t u cross the border? U will get better fireworks (Chinese?), Eid celebs there. I can help u wid packing,” Gambhir wrote in his tweet. This is not the first time that Mirwaiz has praised the Pakistani cricket team. Rejoicing in Pakistan’s semi-final win against hosts England, the Kashmiri separatist had tweeted: “As we were finishing taraweeh, could hear the fire crackers bursting, well played team #Pakistan. Best of luck for the finals!”

Pakistan dominated with both bat and ball to thrash a rather off-colour India by 180 runs and lift the 2017 ICC Champions Trophy on Sunday. This was the first Champions Trophy title for Pakistan. The south Asian nation claimed their third ICC tournament, having earlier won the 50-over World Cup in 1992 and the World Twenty20 in 2009. Put in to bat, Pakistan rode on a century by opener Fakhar Zaman to post a massive total of 338 for 4 in the allotted 50 overs. In reply, India were all out for 158 runs in 30.3 overs. 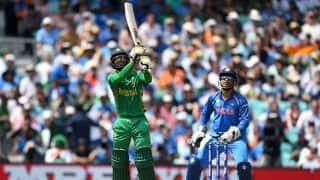