Former India opener Gautam Gambhir reckons that Shikhar Dhawan would be under pressure to keep his place as opener in the Indian team since KL Rahul is doing extremely well. Dhawan, making a comeback to the team after two months due to a knee injury, scratched his way to a 30-ball-32 while Rahul struck a 32-ball 45 as India chased down a modest target of 143 in the second T20 against Sri Lanka in Indore on Tuesday.

White-ball vice-captain and opener Rohit Sharma is not playing this series as he has taken a short break.

“Rahul is in unbelievable form. It amazes me every time I see Rahul bat, that, why didn’t he play the same way in Test cricket. With the kind of quality he posses, he is someone who can get you a 50-ball 100 in Test cricket as well. The kind of shots he has is superb,” Gambhir said during a post-match show for host broadcasters Star Sports.

“Shikhar Dhawan looked rusty but it’s a good thing that he got some runs under his belt. It will help him when he walks out to bat in the next game. Had he got out early, the pressure would have been more,” Gambhir said.

In the second T20I against Sri Lanka in Indore, Rahul played a brilliant knock of 45 off 32 balls which helped India overhaul the 143-run target with considerable ease.

India defeated Sri Lanka by seven wickets in the second T20 on Tuesday, taking a 1-0 lead in the three-match series.

In 2019, Rahul enjoyed a good run in limited-overs cricket having hit two hundreds and three half-centuries in the ODIs. He also registered three more fifty-plus scores in T20Is to cap off his brilliant run in white-ball cricket. 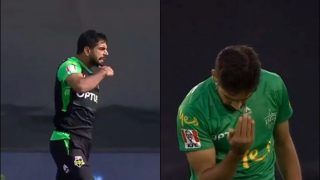