Sanju Samson gets another lease of life to revive his international career as he earns his Indian call-up for the T20I series against Bangladesh.

Cricketer-turned-politician Gautam Gambhir is a happy man after Sanju Samson was named in India’s T20I squad for the three-match series against Bangladesh, beginning November 3. Samson played his only match for India – a T20I – in July 2015 when a second-string team toured Zimbabwe.

Gambhir has been advocating for the talented Kerala cricketer’s inclusion in the Indian team for a long time. “This is well & truly through the gap by @IamSanjuSamson!!! Congratulations on being picked in the T20 squad. Soft hands, nimble feet and hopefully a sane head…go Sanju grab ur moment, long overdue,” Gambhir wrote on his official Twitter handle.

After scoring 19 runs on his debut versus Zimbabwe, it has been a roller-coaster ride for the wicketkeeper-batsman. In 2017, at the start of the domestic season – Samson was dropped from the Kerala team on disciplinary grounds.

Samson has often been touted as a ‘special talent’ but his inconsistency and fitness-related problems never allowed him to fulfil his potential at the highest level. However, an unofficial ODI series against visiting South Africa A side helped Samson rediscover his touch and put him into national reckoning once again.

This is well & truly through the gap by @IamSanjuSamson!!! Congratulations on being picked in the T20 squad. Soft hands, nimble feet and hopefully a sane head…go Sanju grab ur moment, long overdue. @BCCI

During the fourth one-dayer, the 24-year-old played a brilliant knock of 91 off 48 deliveries which incidentally was his highest List A score at that point of time. The knock made selectors and fans take notice of his abilities in the limited-overs format, and that only improved in the Vijay Hazare Trophy 2019-20.

Samson backed up his good form as he smashed an unbeaten 212 for Kerala against Goa in VHT. During the process, he broke a slew of records. The knock took just 129 balls, had 21 boundaries and 10 sixes, scoring at a strike rate of 164.34. It was the fastest double hundred in List A history and the highest score in the tournament’s history.

It eventually paved the way for his return to the national side. 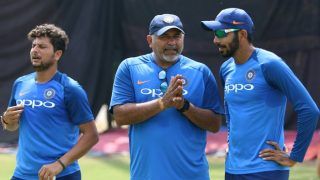