Out of favour India opener Gautam Gambhir on Friday said that he is trying to rediscover his form as he prepares to play county cricket with Essex. 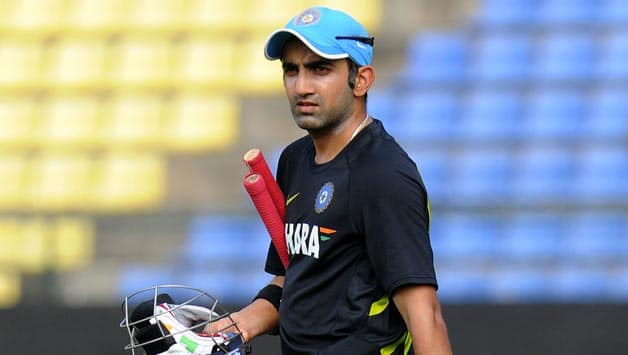 Out of favour India opener Gautam Gambhir on Friday said that he is trying to rediscover his form as he prepares to play county cricket with Essex.

“Well, this was a forced break. No sportsperson wants to be away from his sport. Perhaps I was not scoring as many runs as a batsman who has played over 50 Tests should. But you are right, the break did give me time to introspect and go back to the drawing board. In a way, you can say I’m trying to rediscover my game,” Gambhir was quoted as saying by the Times of India.

“I’ve been away from quality cricket for some time now and this stint has come at the right time. I’ll try to put in practice the things I’ve been working on in the nets. It is a fine balance between what I want to derive out of this personally and Essex’s goal as a team. In a team environment one should keep personal thoughts aside,” Gambhir said.

“While it will be good to score runs, it will be best if I can help Essex win the championship. That can even happen by taking a game-changing catch at forward short leg or just by being a selfless 12th man,” he added.

Gambhir was training with former India player WV Raman and coach Sanjay Bharadwaj to get back into the groove after being sidelined from the Indian side.

“I’ve been working on being positive at the crease — be it my thoughts, stance, getting into hitting a stroke, everything. With [WV] Raman sir and my coach Sanjay Bhardwaj, I’ve been trying to get into a positive groove, which sometimes gets lost in the pressures of international cricket,” he said.

Despite being left out of the side and failing to score runs in heaps as he did a few years back, Gambhir said that he was enjoying batting as much as he ever did.

“I can bat in the morning, afternoon, evening, night, on ice, desert, wherever and whenever. It is almost nirvana for me. It takes me away from the stresses of life. I think only a batsman will be able to tell you about the goose bumps he gets after hitting a perfect cover drive. I’m one of them.”