Bhardwaj also revealed how he never aspired to be a national coach.

For a coach, it doesn’t get bigger than the Dronacharya Award. And while cricket coach Sanjay Bhardwaj has had to wait for his turn, he doesn’t wish to talk about timings. For him, the recognition is a fresh motivation to produce fresh talent who can go ahead and represent the country in the gentleman’s game.

Despite having one of the most impressive CVs in the domestic circuit having coached Gautam Gambhir, Amit Mishra, Reema Malhotra, Joginder Sharma, Unmukt Chand and Nitish Rana among others Bhardwaj doesn’t wish to rest on past laurels.

Bhardwaj, who was recommended for the prestigious award on Saturday, not only discussed seeing his students go ahead and win World Cups for the country, but also revealed how he never aspired to be a national coach as he has always believed that it is a solid foundation that is of utmost importance if the country has to do well at the international level.

“Nothing beats rising to the challenge on the biggest stage and winning the country games,” he pointed.

Asked to pick one performance that shall remain etched in his memory, the 53-year-old said: “Well, since you won’t let me go without mentioning a specific occasion, I will say Gambhir winning India the 2011 World Cup with a brilliant knock. That night was special. But again, I will tell you that the 2007 WT20 win when Gambhir and Joginder did so well is also special. As is Unmukt’s show as captain in the 2012 WC.”

Interestingly, while he has nurtured a number of international cricketers, the idea of coaching the national team never dawned on him reveals the LB Shastri Cricket Academy coach.

“Never really gave the idea a thought if you ask me honestly. I have always believed that the foundation stone is most important and if I can create a supply chain, that is far greater an achievement than hogging the limelight by being a national coach,” he explained.

While the coach promises to not rest on past laurels, his ward Rana is on the verge of breaking into the national set-up. For Bhardwaj that doesn’t change the equation.

“Yes, he is doing really well. I feel he is very close to breaking into the Indian team. But that doesn’t change anything. He might be considered a celebrity by the world, but for me he is still my student and my job is to guide him.

“I remember you telling me the first time he played for Delhi that he looked international material. I have only tried and ensured that the expectations people have from him is fulfilled. Needs to keep his head down and score some big runs for India ‘A’,” he smiled.

Finally, the coach says there is no stopping any time soon. “The journey has only begun. This recognition makes me believe further that hard work always pays off. I want to keep producing players till the day I am able to set my foot on the ground. The process must go on,” he signed off. 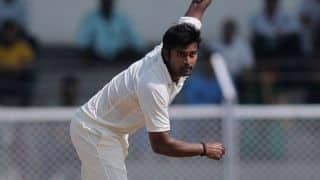