With a batting line-up that had an in-form Chris Gayle and Tillakaratne Dilshan as openers, followed by Virat Kohli and AB de Villiers, a flat pitch demanded more than just 147 as the target. 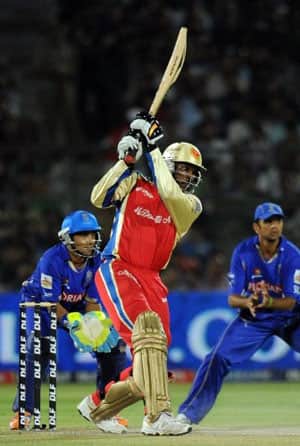 Chris Gayle in action during his unbeaten innings of 70 off 44 balls. AFP

With a batting line-up that had an in-form Chris Gayle and Tillakaratne Dilshan as openers, followed by Virat Kohli and AB de Villiers, a flat pitch demanded more than just 147 as the target.

Bangalore surpassed the target with such a consummate ease to win their record sixth successive game that even 170 may not have been a difficult one. Only two teams have ever win six in a row in the history of IPL.

Dilshan may not have got too many in the previous games but he looked to be in murderous touch in his last game of this IPL. Two fours in the very first over from Shane Watson were both crashed through the extra-cover while Johan Botha was swept fine to the fence in the second.

Gayle, not one to be left behind not in the kind of form he is, anyway pulled a couple to the fence with disdain.

Another two fours from Dilshan s bat followed before Gayle offered a reasonably simple catch to Shane Warne at mid-off. It was powerfully hit but straight at Warne and he floored it, with the ball rolling away to the fence.

Siddharth Trivedi has been given the ball a little too late in some of the previous games. His introduction, however, in the fifth over was necessitated by the want for wickets. Dilshan took care of that with another couple of successive boundaries through the covers.

Gayle celebrated his dropped catch with a six off Botha, who had conceded 35 in his first three overs.

While Warne s dismissal of Dilshan did slightly atone for his dropped catch, Gayle went on to hammer the bowling as has usually been his wont.

The singles came easily on a batting-friendly pitch while the odd boundary helped the side in getting the asking-rate to much lower than six.

Captain for the day, Virat Kohli hurdled his way around for his first couple of overs before lofting Botha for another boundary and the introduction of Ross Taylor only hastened the inevitable. Gayle brought up his half-century with a six over long-on off the New Zealander.

Having got to his 50 (36 balls), Gayle cut further loose, as he took a six and a four off Warne s last over at home in IPL and followed it up with another six in the 16th over bowled by Ashok Menaria.

Kohli ended the game in the manner that one would have expected them to, pulling a six over backward square-leg off Pankaj Singh.

The Rajasthan Royals collapsed once again after a solid first wicket stand between Shane Watson and Rahul Dravid. The pair added 73 in nine and a half overs but much like how it panned out in the game at Chepauk, the separation of the pair caused a middle-order hara-kiri.

Sreenath Aravind scalped both the openers in the same over and then, the other man in form, Ajinkya Rahane was involved in a terrible mix-up and an eventual sacrifice.

Botha failed to do the compensatory job for that run-out, edging one to the keeper and not before long, Ross Taylor had slog-swept one from Charl Langeveldt straight into the hands of the fielder.

Watson and Dravid had earlier done well at the start of the innings again after being put into the bat by Bangalore.

Dravid was his usual graceful self but possessed a much quicker run-rate than usual while Watson managed to slam a couple of sixes in his stay at the crease. Unfortunately for the Royals, it was their dismissals off three deliveries that changed the course of the game.

Pankaj Singh had come into the side in place of Amit Singh while Daniel Vettori and Cheteshwar Pujara missed out for Bangalore due to knee injuries. Arun Karthik, A Kazi and Charl Langeveldt joined the side.

Man of the Match: Sreenath Aravind