West Indies again overlooked Chris Gayle for selection, and his omission has overshadowed the build-up to the first Test against India, starting on Monday at Sabina Park. 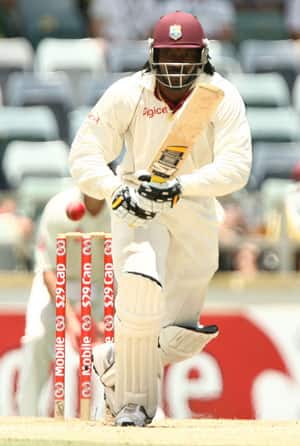 West Indies again overlooked Chris Gayle for selection, and his omission has overshadowed the build-up to the first Test against India, starting on Monday at Sabina Park.

The controversial former captain is involved in a dispute with the West Indies Cricket Board, which has threatened not only his participation in the series, but also his international career for the Caribbean side.

It followed comments he made during an interview on a radio station in his native Jamaica in April.

Gayle and high level West Indies officials met on Tuesday to discuss their differences, but the meeting ended in uncertainty, with the WICB directors to decide on Gayle’s fate at a board meeting in the Jamaica capital on Friday.

Fellow opener Adrian Barath earned a recall instead, and will open with compatriot Lendl Simmons.

Barath spent nearly five months on the sidelines nursing a damaged hamstring, and made a return to the side on Thursday in the fifth One-Day International against the Indians at the same venue.

He is the only change to the previous Test squad that played Pakistan in St. Kitts earlier this month, with teenage opener Kraigg Brathwaite omitted.

Veteran left-hander Shivnarine Chanderpaul has also been at loggerheads with the WICB in recent weeks, but has also been retained.

Chanderpaul also made some highly-charged comment about the WICB officials in a radio interview during the Pakistan series.

He was subsequently written to on the matter, but he played in the first Test against the Pakistanis before injury sidelined him for the second Test.

The WICB said it also intended to have a meeting with Chanderpaul prior to the Test to outline their expectations of him in his future participation in the West Indies team as a player.

It was not clear about the status of all-rounder Dwayne Bravo. He had missed the Tests against Pakistan, after playing in the ODIs, to play in the Indian Premier League.

He played the first two ODIs against the visitors in his native Trinidad, but then requested a break from the game to ‘refocus and reflect’, and was hoping to rejoin the team for the Test series.

Fellow all-rounder Andre Russell impressed during the ODIs against the World champions, but no room could be found for him in the squad.

He probably lost out in the reckoning to experienced fast bowler Fidel Edwards, who will be looking to make a return to the international arena, following almost two years undergoing rehabilitation on his back.

India have no such challenges, and will be looking to put a stamp on their ranking of World No.1.

The Indians have shipped in a number of players – led by World Cup and IPL-winning captain Mahendra Singh Dhoni – that will strengthen their side for the longer format.

Rahul Dravid and vice captain V.V.S. Laxman give more backbone to the batting in particular, and Pragyan Ojha presents another option that could exploit the West Indies’ clear susceptibility to spin bowling.

With their appearances for the visitors confined to Tests now, Dravid and Laxman have had little international exposure over the past few months, with the heavy surfeit of limited-overs matches, so they will need to find their feet, and West Indies could exploit this.

India’s bowling was clearly weakened, when Zaheer Khan and Shantha Sreesanth withdrew due to injury, so the visitors could be a little vulnerable in this area too, but the spinners will hold the key.

But the Indians – Dravid in particular – would have fond memories of this venue, after all, they won a Test five years ago here under him, ending a 35-year spell without a Test series victory in the Caribbean.

It was one of four losses West Indies have endured in their last nine matches at the ground, and Dhoni and his side will be hoping that they can win this Test to spark another series win.