Former Australian batsman Geoff Marsh began his two-year stint as Sri Lanka's new coach on Thursday hoping to lead the side beyond his contract and into the next World Cup in 2015. 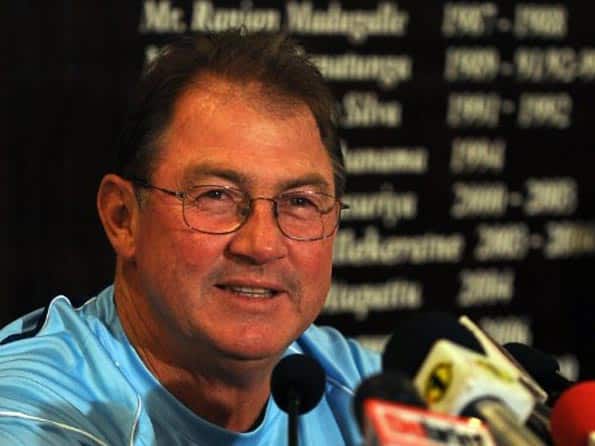 Former Australian batsman Geoff Marsh began his two-year stint as Sri Lanka’s new coach on Thursday hoping to lead the side beyond his contract and into the next World Cup in 2015.

Marsh, who turns 53 in December, said he was ready to accept the challenge of preparing the Sri Lankan team for the World Cup in Australia and New Zealand even though his contract was only for two years.

“We have not talked about the end (of the contract), but the World Cup is something that we look forward to…sure I am ready for that,” Marsh told reporters in Colombo.

Marsh, who played 50 Tests and 117 one-dayers for Australia before retiring in 1992, said his immediate task was to prepare Tillakaratne Dilshan’s men for the upcoming contests against Pakistan.

The series of three Tests, five one-day internationals and one T20 game is to be played in the United Arab Emirates from October 18 to November 25.

Marsh said the challenge ahead was to build a potent bowling attack to replace world bowling record holder Muttiah Muralitharan, who retired in July last year with 800 Test wickets.

“Losing Murali (Muralitharan) was huge… hopefully there is another Murali out there waiting to be found,” he said, adding that he was confident Sri Lanka will soon start winning Test matches again.

Sri Lanka has not won a Test since Muralitharan’s retirement and recently lost 1-0 to Australia at home in a three-match series.

“Touch wood, we won’t have to wait for too long to win a Test,” the new coach said.

Marsh replaces fellow Australian Trevor Bayliss, who stepped down as national coach after guiding the team to the World Cup final in April, where Sri Lanka lost to India.

Sri Lanka appointed Stuart Law as an interim coach for the England tour in May-June and then hired former national player Rumesh Ratnayake for the home series against Australia.

Marsh won the World Cup both as a player (1987) and Australian coach (1999) and was coach of the Pune Warriors franchise in the Indian Premier League when the Sri Lankan job was handed to him.

Marsh said he was happy to be working in Sri Lanka where “people are extremely nice,” but joked that his big challenge was to remember the long names of players. (AFP)