Bailey feels that performances in the recent Test series defeat to Pakistan in the UAE should not be heavily weighed when picking the squad to face India.

Former Australia captain George Bailey has urged the national selectors to pick players for the upcoming home Test series versus India from the ongoing Sheffield Shield.

With four rounds of the four-day Sheffield Shield left before Australia face India in the first Test at Adelaide Oval on December 6, Bailey believes that success in the premier first-class competition should be highly valued when picking the squad for that four-Test series.

“No doubt scoring runs in any game is great because it shows you can do it, but I think selectors would be putting that together with past form in red ball cricket, particularly if you’re trying to pick a team for that first Test,” he told Grandstand radio on Monday. Given the collapses and batting trouble that team has had, you would think scores in first-class cricket would be the best currency.”

Bailey added that performances in the recent Test series defeat to Pakistan in the UAE should not be heavily weighed when picking the squad to face India at home given the challenging conditions there.

“Personally, I wouldn’t read too much into the UAE tour. It’s a really challenging place to play and the conditions will be so different here, said Bailey, who played 90 ODIs, 30 T20Is and five Tests. “I would imagine if there were seven or eight bats the Australian selectors thought were their best for the UAE, I can’t imagine they change too much for an Australia series. There will be opportunities and the easiest thing for batters and bowlers is to be in form at the right time. There is a good lead in before that first Test, so it’s up to the players (to be performing).”

Australia play ODIs and T20Is against South Africa before India arrive for three T20Is between November 21 and 25, followed by four Tests and three ODIs. After India depart, Australia host Sri Lanka for Test matches too. 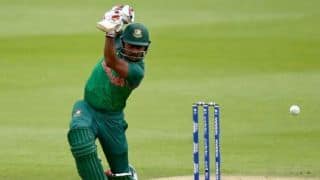