PNG are strong contenders to qualify for the 2015 World Cup in Australasia.

Papua New Guinea’s giant-killing acts in the World Cup qualifying tournament has made many in the cricketing world stand up and take notice but the most renowned figure in their dressing room, Former England wicketkeeper Geraint Jones, is not a bit surprised.

Having beaten former World Cup semi-finalists Kenya and Uganda, PNG now remain strong contenders for a spot in the tournament which will be held in the trans-tasman countries Australia and New Zealand.

Jones will go down in England’s history for taking the catch in the nerve-wracking Edgbaston Test that dismissed Michael Kasprowicz’s off the bowling of Steve Harmison which England won by two runs.

The Australian-bred wicketkeeper, like many of the players in the current line up migrated to England in his teens and later went on to become a vital cog in England’s 2005 Ashes win.

Jones is playing for PNG on the virtue of the island country being the place of his birth.

He revealed in an interview with New Zealand Herald that he made up his mind to switch allegiances during England’s ill fated Ashes whitewash of 2006/07, in which he was dropped midway through the campaign, he said “Once I was dropped by England PNG’s then CEO Bill Lane got in touch and asked me if I would extend my career by playing for them”

Jones showed his determination and appetite for the highest level during the time he sat out his four year qualification period.

After making his debut in 2012, Jones has overseen PNG’s steady rise in the associates’ circuit, and he is enjoying it, he said “To be honest I get just as much from these guys as I give them. I would say it’s a bit of a refresher course for me. It’s a very simple way of playing and I do get hugely energised by being around the group when I go back to county cricket. It is a real boost for me.”

Jones believes one of the main reasons for PNG’s rise is the fact that they have been playing regular cricket and that should be the way forward if we have to see more associate teams compete with the ‘Top Eight’.

“They’ve had a busy workload but I’m seeing the fruit of it in the way we’ve played these first couple of games here. I like to try to offer stuff up to them, but not overload them with anything. I don’t ram it down their throat and they’re good learners,” Jones said.

Jones praised players who have played a vital part in their new found success; Lega Siaka and Assad Vala, new ball bowler Raymond Haoda and legspinner Charles Amini, who took six for 19 in the second win, by nine wickets, over Uganda.

Vala and Amini have now secured contracts with Brisbane Heat and Sydney Sixers of the Big Bash League respectively.

“The big thing is we’re confident in our bowling and fielding aspects. We know we can keep teams down, and our batting has clicked so far.”

When quizzed on his carrier with England, Jones admits that he would have done things a little differently, “I peaked too early to be honest,” he quipped.

Reminiscing about the memorable 2005 series, the Edgbaston Test in particular has become a part of cricketing folklore, Jones said, “That series was phenomenal. I do say to people I’m remembered for one catch, but I’ll take that catch. I’m happy with that.”

The 37 Year-old who plies his trade with Kent in the English County scene is delighted to help his country of birth, as a player and as a mentor and believes that he should be a part of PNG on merit and not because he was a former English player. 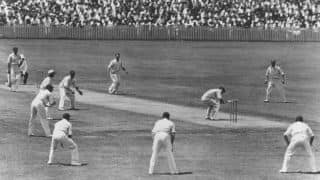 The Bodyline cables: Australian Board sends the infamous protest message to MCC