Glenn Maxwell was dismissed for a mere three by spinner Yuvraj Singh in the third and final T20I between India and Australia at Sydney.

Australian hard-hitter Glenn Maxwell was dismissed for a mere three by spinner Yuvraj Singh in the third and final Twenty20 International (T20I) between India and Australia at the Sydney Cricket Ground (SCG) on Sunday. It was Yuvraj’s very first delivery in the game, as it was again a slowerd deliver, with Maxwell looking to go over the top, fails to read the pace, applies no power, and hands straight to the safe hands of Suresh Raina at extra cover. Currently, Australia are 80 for the loss of three wickets in 10 overs with opener Shane Watson on 47 and Travis Head on four. FULL SCORECARD: India vs Australia, 3rd T20I at Sydney

Earlier, Australia s stand-in skipper Shane Watson won the toss and elected to bat first as he made a mammoth five-changes in the sqaud from the previous T20I defeat at the Melbourne Cricket Ground (MCG) on Friday. He rested Usman Khawaja, Travis Head, Cameron Bancroft (debutante), Shaun Tait and Cameron Boyce come into the side for Aaron Finch, Matthew Wade, James Faulkner, Nathan Lyon and John Hastings. While Indian skipper MS Dhoni moved in with an unchnged squad from the win as they want to stick to the right and winning combionation for quite sometime and not disturb the momentum. FULL CRICKET UPDATES: India vs Australia 2015-16, 3rd T20I at Sydney
India and Australia will lock horns for the final time in this tour when they play the third Twenty20 International (T20I) at Sydney on Sunday. It is the final match of their ongoing three-match T20I series and having won the first two matches, India sealed have already sealed the series. India defeated Australia by 27 runs in the second T20I at Melbourne Cricket Ground (MCG) on Friday and with that MS Dhoni s men ensured that they return home with a trophy.
First Published on
Last updated on January 31, 2016 2:34 PM IST
TOPICS:
Australia Australia vs India Australia vs India 2016 Glenn Maxwell India India tour of Australia 2016 India vs Australia India vs Australia 2016 Yuvraj Singh
SERIES:
India vs Australia, 2015-16 Match : India vs Australia 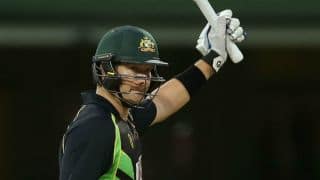