Former fast bowlers Glenn McGrath and Charlie Turner will be inducted into the Australian Cricket Hall of Fame at this year's Allan Border Medal ceremony on Monday at Mlebourne. Former fast bowlers Glenn McGrath and Charlie Turner will be inducted into the Australian Cricket Hall of Fame at this year’s Allan Border Medal ceremony on Monday at Mlebourne.

ACHoF chairman David Crow on Sunday, said McGrath and Turner were the selection committee’s unanimous choice for induction this year.

“Glenn McGrath and Charlie Turner were each the outstanding Australian fast bowler of their era. Despite careers more than a century apart, they had much in common,” said Crow.

“Tall, right-arm fast bowlers, both men hailed from country New South Wales. Their superb records demonstrate the dominance each had over opposition batsmen over a prolonged period.”

Thrust into Test cricket in 1993 with limited first-class experience, McGrath became the greatest Australian fast bowler of his generation.

In a 14-year Test career spanning 124 matches, McGrath’s 563 wickets at 21.64 is the highest tally by a fast bowler and fourth-highest of all-time, behind Shane Warne, Muttiah Muralitharan and Anil Kumble.

His unrelenting accuracy and immaculate length also posed problems for batsmen in limited-overs internationals, with his 381 wickets the sixth-highest in history.

In the 2007 World Cup, McGrath’s swansong for Australia, he took a record 26 wickets and was named Man of the Tournament.

Winner of the Allan Border Medal (2000) and named Wisden Cricketer of the Year (1998), McGrath was inducted into the ICC Hall of Fame in December last year. .McGrath said he was delighted to be inducted into the ACHoF and will fly from India, where he is currently working as a coach for the MRF Pace Academy, to attend the ceremony.

“I grew up in the country, watching and loving cricket from a young age, and the thought of playing for Australia was a dream. To achieve that, to be lucky enough to play for as long as I did and now to be inducted in the Hall of Fame, is a huge honour.

“To be featured alongside some of my heroes growing up guys like Dennis Lillee, Rod Marsh and the Chappells is pretty amazing, too.

“I am proud to be inducted alongside Charlie Turner. I didn’t know a great deal about him, but when I found out that we were being inducted together, I did a bit of homework.”

Turner was a formidable opponent, possessing a rhythmic run and a square-on action at the point of delivery, took 6/15 on Test debut at Sydney in 1887, helping dismiss England for 45, which remains the lowest total by England against Australia. 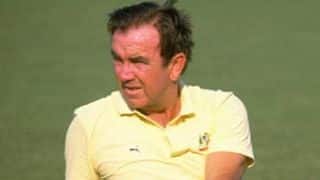