Zimbabwe skipper Graeme Cremer led his side from front taking a 3-for that reduced Sri Lanka to 293 for 7 at stumps of Day Two of the only Test at Colombo.

Zimbabwe skipper Graeme Cremer led his side from front taking a 3-for that reduced Sri Lanka to 293 for 7 at stumps of Day Two of the only Test at Colombo. After bundling Zimbabwe for 356 early in the morning, Sri Lanka had an impressive first session as they put up 77 without any loss. However, Zimbbawe made a great comeback post lunch and bagged 3 and 4 wickets respectively in the following sessions to put the hosts under pressure. At stumps, Day Two, Sri Lanka trail Zimbabwe by 63 runs. Live cricket scorecard: Sri Lanka vs Zimbabwe, One-off Test

After the 84-run opening stand between Dimuth Karunaratne and Upul Tharanga, Dinesh Chandimal and Angelo Mathews held fort, putting up an unbeaten 68-run partnership till tea. Coming back for the third session, Cremer kept on bowling along with Sikandar Raza at the other end. Both bowlers found great assist from the pitch and managed to produce turns to confuse the batsman. However, Chandimal and Mathews showed good defense. Chandimal got to his half-century but soon departed for 55 as he failed to read the turn and edged one to the wicketkeeper.

Mathews was joined by Niroshan Dickwella at the crease but the latter could not do much. Going for the wrong shot selection, he exposed his stumps and got bowled for 6. At this point, Sri Lanka started to feel the pressure, as was evident for the way Mathews and Dilruwan Perera played. Perera hit one six to release some pressure after a few economical overs but it did not help much as Mathews got dismissed for 41 a couple of overs later. It was the second good catch of the day by Hamilton Masakadza who dived forward to hold onto the ball after it was mishit by Mathews.

Despite the fall of wickets, Perera kept hitting the ball hard. He ensured frequent boundaries as well as sixes whenever there was a loose delivery. Joined by Asela Gunaratne at the crease, the two built up the third important partnership of Sri Lanka’s innings that brought stability after the big wickets. The partnership was finally broken by an amazingly executed run out. Perera was hesitant about the quic single Gunaratne had called for despite his hamstring injury and it resulted in a run out after a swift collect and throw by Tarisai Musakanda.

The run out saw Perera, who looked in a destructive mood, depart for 33. At stumps, Gunaratne remained unbeaten at 24 with Rangana Herath at 5.

Earlier, Rangana Herath’s 5-for had restricted Zimbabwe at 356. Zimbabwe resumed batting with 344 for 8 on the board. But Herath and Lahiru Kumara removed Donald Tiripano and Craig Ervine respectively, ending Zimbabwe’s inning within 4.4 overs of Day Two’s play. With this, Herath registered the 30th 4-wicket-haul of his Test career.

Sri Lanka openers Dimuth Karunaratne and Upul Tharanga provided their team with a solid start. Tharanga completed his half-century and remained unbeaten till the end of first session with Karunaratne but Zimbabwe showed great mettle, making a strong comeback with frequent wickets in the following sessions. 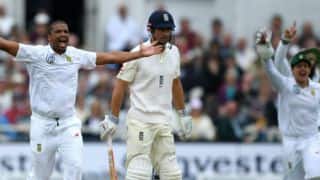