After a hectic few days of interviews and public appearances to mark his 100th Test captaincy, Graeme Smith looked forward on Thursday to getting back to the core business of leading the South African cricket team in the first Test against Pakistan starting at the Wanderers Stadium on Friday. After a hectic few days of interviews and public appearances to mark his 100th Test captaincy, Graeme Smith looked forward on Thursday to getting back to the core business of leading the South African cricket team in the first Test against Pakistan starting at the Wanderers Stadium on Friday.

“It has been emotional and humbling,” Smith said of the outpouring of praise and public adulation that preceded him becoming the first man in history to captain a team 100 times in Tests.

“When I wake up tomorrow, turning 32 and leading South Africa out is going to be one of the proudest moments in my career and my life.”

He said playing his 100th Test against England at the Oval last year had given him a “little taste” of dealing with a major milestone.

He was proud to have achieved success then – he scored a century and South Africa won by an innings – but said it was different this time because it was on home soil.

“The advantage then was that I was in a foreign country and I was able to create a little space.

“Being in South Africa over the last few days has been incredible. I have been walking around in a constant buzz.

“This afternoon and evening is obviously a crucial time in terms of our preparation and to make sure that I get some space to focus on my performance.

“The team training sessions have been tough and hard and that has been a good reality check. The team is in a good space.”

Sports minister Fikile Mbalula sat next to Smith at the captain’s pre-match press conference, which he said was a “special occasion”.

He praised Smith’s resilience and his ability to inspire South Africa’s youth and described him as “a paragon of human perfection”.

Smith said he felt that resilience had been one of his main attributes as a captain after being given the job in 2003 at the age of 22.

“There are a lot of growth periods. People had to be patient with me. I feel that from the back end of 2007 and early 2008 was the first time I really got a grasp of what the job was about,” he said.

“The last five to six years is the time I have really felt in control of the leadership, the direction of the team and what it entails to be Proteas captain.

“From a team perspective, winning back to back in England and Australia (in 2008 and 2012) is probably the great achievement. The other thing I am proud of is being able to perform in my own game. Opening the batting is tough.”

He said he regretted not having been able to lead South Africa to a World Cup title but hoped still to be part of a successful World Cup challenge as a player, having given up the one-day captaincy after a failed 2011 campaign.

The aftermath of the World Cup, when he was criticised for not returning with the team, had been a low point, he added. “My own self-esteem and confidence took a whack.”

Smith praised coach Gary Kirsten for persuading him to carry on as Test captain.

Pakistan captain Misbah-ul-Haq posed with Smith and the series trophy, then said that he believed his team could rise to the challenge of meeting the number one-ranked South Africans on what he said looked like a good pitch, with pace and bounce.

“It’s not easy but this team has been taking challenges very well in the last two-and-a-half years,” he said. “It is a case of showing character against the top side in the world.” 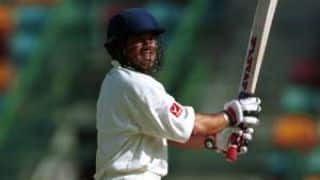