Graeme Smith said he will would comment on Warner's comments at the end of the series.

South African captain Graeme Smith made no secret of his annoyance at Australian opener David Warner accusing the hosts of tampering the ball in search of reverse swing in the second Test match in Port Elizabeth, where Australian batsmen fell like a pack of cards in Port Elizabeth.

“He’s becoming a bit of rent-a-quote,” said the South African captain. “My thoughts are pretty strong and I’ll probably say something later but at the moment my focus is on preparing for this game.

Both captains said they were looking forward to a contest which has attracted huge interest.

“It’s all set up for a cracking Test match,” said Smith said. “You can feel the vibe around Cape Town. Most of the cricketing eyes of the world are going to be on this Test match.

“It’s between two quality teams who play the game hard and that’s what you want in Test cricket.”

Smith said he and his team were well prepared for a clash which has sparked an unprecedented run of tickets for a Test at Newlands, with the first two days completely sold out.

“It’s an exciting opportunity for us over the next five days and one that I’m really looking forward to,” said Smith.

“It’s been a challenging two weeks. A few obstacles have come our way and off the field there have been a few challenges personally as well. But I’ve had a good week of preparation personally and the team is in a good space.”

Smith did not elaborate on the “obstacles” but injuries, illness and Warner’s accusations have all added to the drama of a contest which stands at one Test each.

He said the personal issues were linked to his 19-month-old daughter Cadence but did not provide any details. 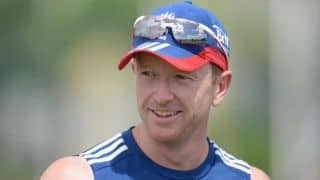