Mitchell Johnson picked up seven wickets in the 2nd innings of the 1st Test.

Australian left-arm fast bowler Mitchell Johnson, who claimed seven South African wickets in the first test being played at the Centurion cricket ground, has said that Proteas skipper Graeme Smith was not scared of facing him, and added that it would be wrong to question the latter’s courage.

It maybe recalled that Johnson twice broke Smith’s hand in 2009, once in Sydney and soon after in Durban, and on Thursday, Smith faced two deliveries from Johnson on a bouncy Centurion deck and didn’t look comfortable on either occasion, reported the Sydney Morning Herald.

Johnson maintained that South Africa is the number one Test team in the world, and to say that they are fearful of the Australians, is wrong.

He further said that the South African cricketers are professional sportsmen,and when they can face their own Morne Morkel, who gets extreme bounce and pace when he bowls, where was the question of having any fear? 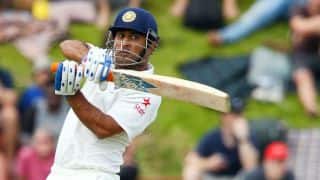