Off-spinner Graeme Swann has advocated the idea of playing two slow bowlers in the England XI for the first Test against Pakistan starting from Tuesday. 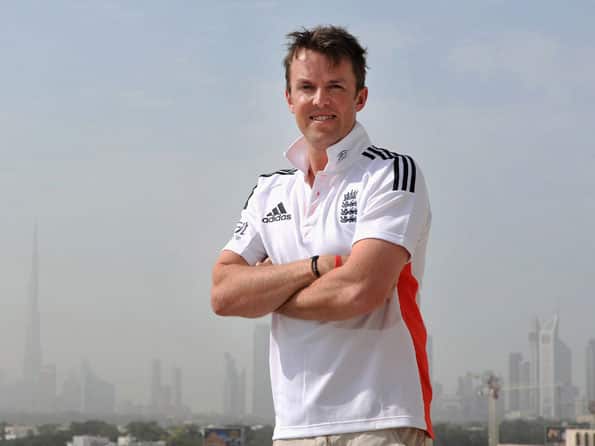 Graeme Swann, who is likely to play a lead role for England, said he always advocated the use of two spinners Getty Images

Off-spinner Graeme Swann has advocated the idea of playing two slow bowlers in the England XI for the first Test against Pakistan starting from Tuesday.

England warmed up for the opening match of the three-Test series with a 100-run win against a Pakistan Cricket Board XI with left-arm spinner Monty Panesar staking claims to partner Swann with eight wickets in the side game.

And Swann, England’s frontline spinner for some time now, backed the idea of playing with two spinners on the slow, turning pitches in United Arab Emirates.

“Yes I would, I’ve always advocated the use of two spinners and I love the rhythm and tempo the game takes when there are two spinners,” said Swann, who is likely to play a lead role for England again.

“You have all the men round the bat and with everyone in close you can make shot suggestions to the batsman that he might not otherwise do,” said Swann of the action when two spinners are employed in a Test.

England last played two spinners in a Test against Bangladesh in March 2010, with another off-spinner James Tredwell partnering Swann.

Irrespective of England’s ploy, Pakistan are certain to play with two spinners in Saeed Ajmal and Abdul Rehman.

Swann, 32, welcomed the return of Panesar, who has not played a Test since the Cardiff Ashes match in 2009.

“It is great to see Monty back and bowling so well. It is always tough if you lose form and your place in the team. It is very hard to dust yourself down and get back to your fighting weight,” said Swann, who doesn’t feel presure from Panesar.

“This week I wasn’t really focusing on how many wickets I took; I was focused on how well I was bowling and by the end I was very happy with it,” said Swann, insisting he is back to full fitness.

“I was a bit nervous going into the last warm-up game because my thigh felt like a 32-year-old’s rather than a 22-year-old’s. But it managed to get through and I felt great by the end of the game.

When asked about Pakistani spinner Ajmal’s plans to unveil a mystery delivery, Swann replied with amazement: “That is the greatest thing about it, because all the spinners that come up with these ‘balls’ so to speak, the names are highly unoriginal and not impressive.

“But the ‘teesra’ is a stroke of genius,” said Swann of Ajmal’s delivery named “teesra.”

“I wouldn’t bother. I’ve never sat down and thought about it. I’m just impressed by the word teesra. Let’s face it – as an off spinner you can have a ball that goes one way and one that goes the other and one that goes straight on.

The three-Test series will be followed by four one-day and three Twenty20 internationals.(AFP)

Phasing out of senior players should be carefully planned: MS Dhoni