Darren Gough thinks that Graeme Swann might one day be regarded as England's greatest spinner and believes that James Anderson is the country's best-ever new ball bowler. Darren Gough thinks that Graeme Swann might one day be regarded as England‘s greatest spinner and believes that James Anderson is the country’s best-ever new ball bowler.

Gough also said that all-rounder Stuart Broad would go on to collect more than 300 Test wickets, as reported by Reuters.

“I think he’ll end up with more than 300 Test wickets and Broad too. These guys keep fit, they hardly play any county cricket any more like we did in my day. They know they only have to play seven or eight Tests in the English summer and another eight or so in the winter.

“That’s all they have to play and they don’t have to play one-day cricket either,” said the former Yorkshire captain.”

Swann, 34, entered the second Ashes 2013 Test at Lord’s against Australia with 226 wickets to his name. He got five more as the Aussies were bowled out for 128 in the first innings on Friday.

Derek Underwood is England’s most prolific wicket-taker among spinners with 297 wickets. He is ahead of Swann and Jim Laker, who has 193 to his name.

Anderson, 30, picked up 10 wickets in the first Test win at Trent Bridge last week to improve his overall tally to 317. He is quickly reducing the gap on Ian Botham‘s all-time England record of 383 wickets.

“Anderson is going to break all sorts of records,” said Gough, who was in attendance at the 142nd British Open Golf Championship at Muirfield in Scotland.

“Jimmy, of all the bowlers I’ve seen with the new ball in his hand, is the best simply because he can bowl out-swingers with little change of action. I can’t remember anyone ever doing that before.

“With Beefy I could tell from his action what sort of ball he was going to bowl. With Jimmy there’s hardly any change, it’s all down to his wrist action.”

Gough, 42, whose career was shortened by a knee injury at the back end of his career, said the fitness levels of modern cricketers were very high.

“These guys don’t get injuries like we used to in the old days, they can work on their fitness between matches and this is how it always should have been,” Gough added.

“England used to be 10 years behind everyone in world cricket but it shows when you get the system right you produce world-class cricketers and it’s great to see.” 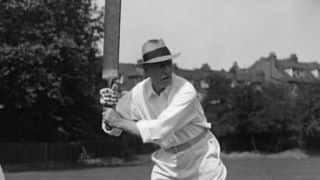