Grant Elliott confirmed his full retirement from international cricket in receiving a special presentation alongside Nathan McCullum at an award night on Thursday.

Wellington: New Zealand all-rounder Grant Elliott, who struck a six off South Africa paceman Dale Steyn‘s delivery to guide his country to their maiden World Cup final in 2015, has confirmed his retirement from international cricket after signing a deal to play in England’s T20 competition. The 38-year-old confirmed his full retirement from international cricket in receiving a special presentation alongside Nathan McCullum at an award night on Thursday. Posting a picture of him with New Zealand captain Kane Williamson and vice-captain Tim Southee, Elliott wrote on Twitter, “Loved playing with the @BLACKCAPS and to have made some special friendships along the way. A team environment I will never forget. #BTB”.

Loved playing with the @BLACKCAPS and to have made some special friendships along the way.A team environment I will never forget.#BTB pic.twitter.com/3kl78X11ya

A veteran of more than 100 games for the Black Caps, the South African-born player emigrated to New Zealand in 2001 and made his international debut in 2008, stuff.co.nz reported. Elliott, who took retirement from ODI cricket in April last year, appeared in five Tests and 16 T20Is for New Zealand but was most prominent in the 50-over format, where he played 83 games and scored almost 2000 runs besides also taking 39 wickets.

Elliott will now join New Zealand internationals Colin de Grandhomme and Jeetan Patel at the Birmingham Bears after signing a Kolpak deal, which means he gives up his right to play for his country and is not classed as one of the two overseas players each team is allowed.

Very few people knew that Elliott is the maker of the Buzz Cricket Bat, which he usually uses. Apart from him, other cricketers like Dewayne Bowden, Mark Houghton, Leighton Morgan, Chris Nevin and Luke Woodcock have also used his bat. 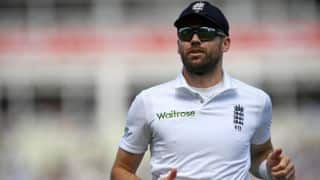 James Anderson: I would have 'seriously' considered Test captaincy if offered