Pakistan will tour Sri Lanka early next month to play two Tests and three ODIs and a T20.

Pakistan’s foreign batting coach Grant Flower has described his new assignment as a “big challenge” and said he was looking forward to convincing Umar Akmal and Shahid Afridi to do away with their habit of throwing away good starts. A day after reaching Pakistan for his two-year assignment, the former Zimbabwe batsman told reporters in Lahore that there was pressure on him to deliver.

“There is pressure but I look at this job as a big challenge but there is also a feeling that if I succeed the rewards are great and Pakistan cricket will move forward a lot. My main focus right now is to ensure there is improvement in batting and fielding departments before the World Cup which is an important event for us,” Flower said.

“The good thing about Pakistan cricket is that it is always capable of winning anywhere and against anyone. There is natural talent but it has to be honed as well. I am looking forward to convincing talented batsmen like Umar Akmal and Afridi to leave their habit of playing in a hurry and ask them to use their batting skills more significantly for the team. I have seen them throw away good starts because of their hurried approach. I know they can be so much more dangerous if they curb their habit and remain at the crease,” he added.

Umar has been named in Pakistan’s Test squad for the Sri Lanka tour after being sidelined in this format for nearly three years. Umar, the younger brother of wicketkeeper Kamran Akmal, had said that he will try to not let the selectors down. He also made it clear that he prefers Test cricket over ODIs. Flower, who is the brother of England’s former head coach Andy Flower, said he had a fair idea of the psyche of Pakistani players having played a lot against them.

“It is a challenge but every assignment for a professional coach is a challenge but I am keen to leave a positive imprint on Pakistan cricket,” he said. Pakistan’s head coach Waqar Younis held a detailed meeting with his coaching staff including Flower, spin bowling consultant Mushtaq Ahmed, fielding coach and trainer Grant Ludon and assistant coach Shahid Aslam today after the training camp of the national team ahead of the Lanka tour could not start due to heavy rains in Lahore. Pakistan tours Sri Lanka early next month to play two Tests and three ODIs and a T20 match. 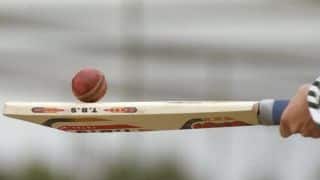