GCA announced that noted architect firm 'M/s. Populous' has been roped in as the principle architect to design the stadium.

Ahmedabad: Gujarat Cricket Association (GCA) Vice President Parimal Nathwani, along with other office bearers on Monday laid foundation stone for the “world’s biggest cricket stadium”, coming up in Motera area. The approximate cost for building the stadium is Rs Rs. 700 crore. On the occasion, Nathwani announced that the construction of the new stadium, being built in place of the old ‘Sardar Patel Gujarat Stadium’, will be over in two years. “Upon completion, this new stadium at Motera will be the biggest cricket stadium in the world with seating capacity of 1.10 lakh, putting behind the Melbourne stadium [in Australia], which accommodates 90,000 spectators,” claimed Nathwani.

He also said that noted architect firm ‘M/s. Populous’ has been roped in as the principle architect to design the stadium. This is the same firm which had designed the Melbourne Cricket Ground, said Nathwani. The VP was accompanied by GCA joint secretary Jay Shah, son of GCA and BJP chief Amit Shah. Several other office bearers of GCA along with Gujarat skipper Pathiv Patel were present on the occasion. The old stadium, which had seating capacity of 54,000 was razed recently by the GCA to build the new stadium, spread across 63 acres. “The total cost of the the project is estimated at Rs 700 crore. The stadium will have 76 corporate boxes, four dressing rooms, a club house and an Olympic-size swimming pool. Engineering firm ‘L&T’ has awarded the work to build this stadium through tender process” said Nathwani.

To cope-up with the traffic congestion issues, which is common during matches, Nathwani announced that the stadium will have three entry points instead of one. “In the new stadium, traffic will be segregated in three directions. Apart from the old Sabarmati to Motera road, there is a planning to integrate Metro Rail, which will pass from here. Third option is to link the Sabarmati Riverfront road with the stadium,” said Nathwani. He also hinted that there is possibility that upon completion the new stadium will have a new name. 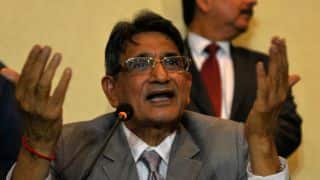 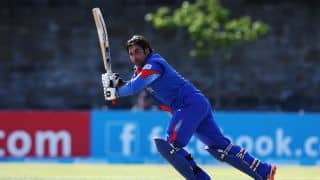