Kings XI Punjab take on Gujarat Lions in Match 28 of Indian Premier League (IPL) 2016 at Rajkot on Sunday. While Gujarat are the table toppers at present with six wins from seven outings in the ninth edition of IPL, Punjab on the other hand are right at the bottom of the table with one win from six matches. Punjab fell short of 25 runs in their previous fixture when they faced Mumbai Indians at Mohali. Punjab have got a new skipper in Murali Vijay who has replaced David Miller in between the league. Punjab’s head coach Sanjay Bangar has suggested that the step was taken because captaincy was affecting Miller’s form which could be one of the reasons behind Punjab’s string of losses. LIVE CRICKET SCORECARD: Gujarat Lions vs Kings XI Punjab, IPL 2016 at Rajkot

On the other hand, Gujarat are coming off back to back three wins after they were defeated by Sunrisers Hyderabad at Rajkot. Their previous match was against Rising Pune Supergiants that was stretched till the last ball of the match. Batting first, Pune had posted a well competitive total of 195, thanks to Australian skipper Steven Smith’s century. He scored a 54-ball 101 that was inclusive of five sixes and eight boundaries. He was supported by Ajinkya Rahane’s 53 off 45.

In reply once again Brendon McCullum and Dwayne Smith took Gujarat to a flier and eventually the side won the match by three wickets with no ball to spare. Gujarat’s batting will once again depend on these two and Punjab have to get rid of them early in order to take a shot at the victory. 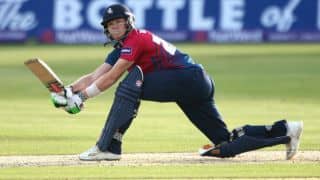